Each day leading up to Christmas, kids will find Randy the Reindeer holding a new card in his arms, an act of kindness challenge for the day. 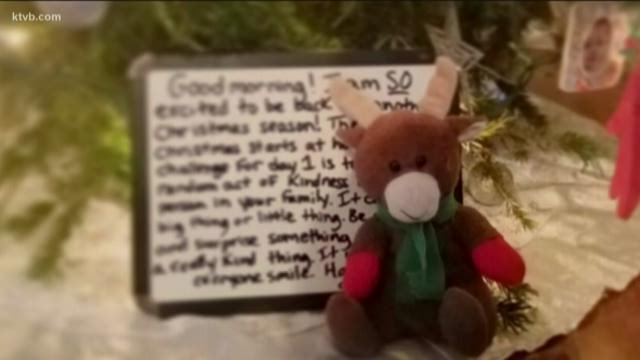 NAMPA — Ashlie Van Vorous and Rachel Bartlette created a little stuffed toy reindeer they hope will make a big impact on the world.

His name is Randy the Reindeer.

"We wanted something that our kids could focus on being kind and thinking of others instead of themselves," Van Vorous said.

Each day leading up to Christmas, kids will find Randy the Reindeer holding a new card in his arms, an act of kindness challenge for the day.

"The challenge can be as simple as holding a door for somebody or giving someone a compliment," Bartlette said.

Other challenges include sending a letter to soldiers overseas, volunteering for a local organization and taking treats to local first responders.

"My favorite part is when they come back and say, 'Mom you should have seen the smile on their face,'" Van Vorous said. "Just that they're noticing how they're changing someone else's day and also how it's changing their day."

Van Vorous first came up with the idea five years ago. She and her husband were trying to think of something new they could do with their kids during the holidays - something to remind them of what the season is really about.

She found a reindeer at a dollar store and began to leave it each day for her kids along with a handwritten note, a challenge for them to perform an act of kindness.

That little dollar store reindeer became a tradition with her family, and her kids affectionately named him Randy. She never intended to make a business out of it. But then last year, one of her Facebook posts about Randy the Reindeer caught the attention of Bartlette's husband, who works with Van Vorous's husband.

"And my husband was like talking to her husband like this is a great idea," Bartlette said. "'Why haven't you guys acted on this and like made this a thing to spread around the world?' At first we were like, this is a joke. We were laughing. And then we were like why don't we do this?"

And so they did. The four of them spent all summer working on their business plan and more importantly, what their new Randy the Reindeer would look like.

"We designed him," Van Vorous said. "[Bartlett] drew him. So we sent in her drawing and they made a stuffed toy from her drawing."

Their first shipments of Randy the Reindeer came in just three weeks ago. Right now, a dining room table serves as their warehouse and distribution center.

"It's really exciting to have them come to life and in our hands," Bartlette said.

The buzz over Randy the Reindeer is growing on social media. Just recently he's been shipped to families in North Carolina and Pennsylvania.

"You being kind changes not only their day but your own day and your own attitude," Van Vorous said.

The kindness started in Nampa, rippling into something big.

"And I think that's another goal of ours is to just make kids and humans alike aware of people and their surroundings and how a little gesture, even a smile can change somebody's day," Bartlette said.

You can learn more about this heartwarming project on the Randy the Reindeer website and Facebook page.