Lauren Macey says she posted her essay on Facebook as a way to cope with the tragedy, and to encourage others to stand up for change. 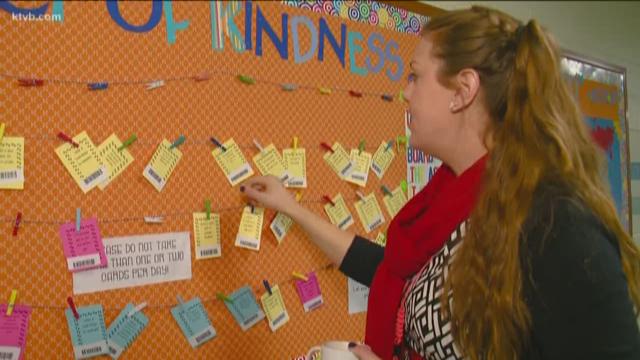 CALDWELL - Overcome by the Florida school shooting that took the lives of 17 people in February, a Caldwell middle school teacher took to Facebook like so many people did that day.

But Lauren Macey's emotions were not of hate, finger-pointing or name-calling when it comes to the debate over gun control and keeping our schools safe.

Macey says the images of the shooting at Marjory Stoneman Douglas High School in Parkland, Florida kept her awake the night it happened, even after working a 13-hour day. So the English teacher started writing in a notes app on her smartphone that she later posted on Facebook.

"I'm a teacher, I work at a school," Macey wrote. "Every time there's a shooting, my heart breaks. I think about what I would do if I were in that situation -- how I would react. And it's terrifying. It's my worst nightmare."

Macey told us in an interview two weeks after she posted her essay on Facebook that she wrote it to deal with her thoughts and emotions, but also to encourage people to make some changes in their own lives.

"My news feed is filled with people arguing about gun control and arguing about whether 'thoughts and prayers' are better or worse than 'policy and change,'" Macey wrote. "But what if we stand together to channel the anger, and the outrage, and the questions, and every other emotion into creating a better day for the people that we encounter."

Creating a better day for the people we encounter is a notion lost among most adults commenting on social media, but not at Syringa Middle School in Caldwell, where Macey teaches.

"We would much rather have kids who, instead of standing up for gun control after a tragedy has happened, stand up in the lunch room when they see their friend getting bullied," Macey said.

"At Syringa, what we're trying to do, and the message I was trying to push is that we want to be proactive," Macey said. "We want to get these kids while they're young and teach them how to be kind, and how to respect each other, and how to stand up when they see something that's not right, and how to befriend kids that are a little bit different."

In the Florida school shooting, the 19-year-old suspect has been described by officials as a "broken human being" and on medication for "emotional issues." The Broward County mayor described Nicolas Cruz as one of the ones where "we missed the signs."

"But I can't help but wonder... in 19 years of life, could something have been DONE? I bet so," Macey wrote in her Facebook post. "Was this kid respected? Was he heard? Did the people around him notice? Did he know he was loved? Was he included? It's not an excuse -- there's no excuse. But if I had to guess, I'd say probably not."

"Greet every kid by name as they walk in the door, just say, 'Hi I'm glad you here, hey glad you made it, hey, I missed you yesterday,' just so you have a personal encounter with every single kid that comes into your room," Macey said. How often do we think we're invisible, and that no one notices? And when a teacher says, 'Hey I noticed you were gone, I missed you, class was not the same without you,' how good does it feel to walk back into that class and be welcomed into that community."

Kindness reminders are everywhere at Syringa Middle School. Students are taught their actions have an effect on the people around them, even something as small as a post-it note can make a difference. Post-it notes with kind messages are on bulletin boards throughout the school for students to choose from or they can make their own.

"If you see someone who's struggling or having a hard day, you can grab one of those post-it notes, give it to them, or put it on their locker and just spread kindness that way with a little note," Macey said.

There are other interactive kindness bulletin boards with kindness challenges posted daily. Challenges include things like letting someone in front of you in line and inviting someone to eat lunch with you. After students complete the act of kindness, they're rewarded each Friday at the Kindness Store, which is run by school counselors. There are also leadership classes, a sunshine club for students who don't feel they fit in, and weekly culture hero challenges.