The Treasure Valley is scattered with singers and songwriters who love to tell stories through song. But there is likely none with a more fascinating and winding tale as a Middleton man whose shady past is propelling his future. 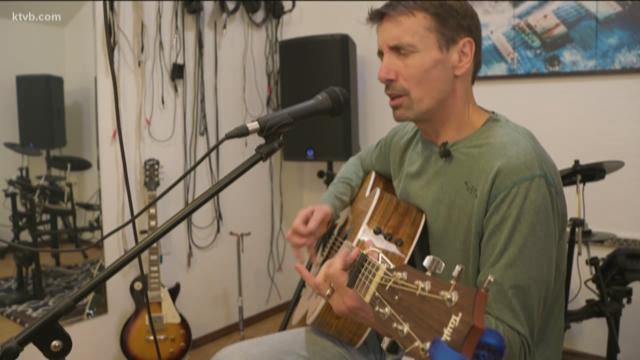 BOISE, Idaho — Labels, like those marking a strip mall coffee shop, can be misleading. They sometimes conceal what's really going on within.

One of those featured was Wayne Byerly, a 57 year-old whose age doesn't tell the whole story of the path he's taken to take a seat on this stage.

"It's called, 'The Longest Road Home,'" Wayne says as he begins another song.

He followed that road home more than a decade ago. On three and a half acres just outside Middleton, he has a dog, a cat, several chickens, a garden in hibernation, and an active basketball hoop in the driveway for his kids.

This place isn't too far from the ranch his family first moved to in 1973 when Wayne was 12 and woke up everyday to 35 acres worth of chores.

"And those chores never ended," he remembers.

It was a life of labor Wayne wanted nothing to do with.

"I wanted excitement, I was looking for excitement."

That elusive excitement was found in felony burglary; Wayne was convicted of stealing money from a local store in the early 1980s. He turned 22 at the Idaho State Penitentiary but was released after serving two years. He then hoped to find a new life in Phoenix, Arizona.

But his past came back to him. When a friend he met while locked up in Idaho tracked him down and tried to entice him to rob banks, Wayne was all ears.

"I guess I was looking for a short cut," Wayne says. "And if I could rob a bank and get a bunch of money and get away with it, what fun I could have."

They took down three banks before being caught.

Sent out of state, Wayne says he was three and half years into a 15-year federal prison sentence when his cellmate in Memphis handed him his guitar.

"And he taught me three chords," Wayne recalls. "And when he got out a year later, I was giving him lessons."

That's the thing with Wayne, he doesn't do anything halfway.

"I don't have the ability to just do it a little bit."

So those days of solitary cell life, hours spent playing guitar, led to lucid dreams of a life in music.

By 1993 he was back in Phoenix, released again on parole, but Wayne couldn't quite let go of a life of crime.

This time he went bigger, for bigger payoffs.

"And there was a lot more money and it worked pretty well for another six more banks," Wayne says. "Before the Tucson debacle."

In 1997, Wayne and three others went into a Wells Fargo bank in Tuscon, Arizona but came out two minutes too late, leading to a chase, a shootout, and another arrest.

Wayne, nursing a buckshot in his back, had hit rock bottom and decided to save himself.

"You can call me a snitch, or a rat, I didn't care," Wayne says of going against the convict code of not turning in your partners. "I was willing to look you in the eye and say 'I'm not going to be this person anymore.'"

Cooperating with police got him a reduced sentence, spending four years in a maximum security federal prison, where Wayne leaned into his guitar for guidance.

"I never, ever stopped thinking about it and writing lyrics and singing in my cell."

Wayne says he wrote 20 songs as an inmate and when he was released for the last time in 2004 he was ready to chase his dream.

Not that spending 16 years of his life behind bars didn't take its toll.

"It chips away at your soul, it takes away from who you are," Wayne says, his voice cracking a bit. "And I couldn't figure that out until later in my life. But I was figuring it out, a little at a time."

Back in Idaho since 2008 Wayne says his life now, filled with music, and with a wife and three kids, has helped replace those pieces he lost.

And he's filling others with feelings, too.

At the coffee house, Wayne's wife of 12 years, Betsy, sits in the crowd listening to him sing a verse about her. She can hardly contain her smile.

"It made my heart swell, it made me so proud," she says of his first three-song set.

Betsy has heard all of Wayne's stories but she still can't see him in any of them.

"It's hard to believe he was that person back then because he's just completely different," Betsy says.

Because labels, like the one of felon Wayne wears, don't tell the whole story.

So, as Wayne gives the crowd a taste of what he lived through, through songs about breaking the law, cell mates, and finding salvation, the question left lingering is - can a modern-day Jesse James make his way in music?

Wayne will face that stretch in a way he knows all too well, one minute at a time.

Wayne, who drives a truck for a day job, spends hours every evening in his backyard shed working on his music. His hope is to make it his full-time career.

There is so much more to Wayne's story, both inside and out of prison, you can read about right here.