You Can Grow It: The Life of Bees Part 2 - the hives of activity

Jim Duthie puts on a beekeeper's suit and shows what it takes to become a backyard beekeeper. 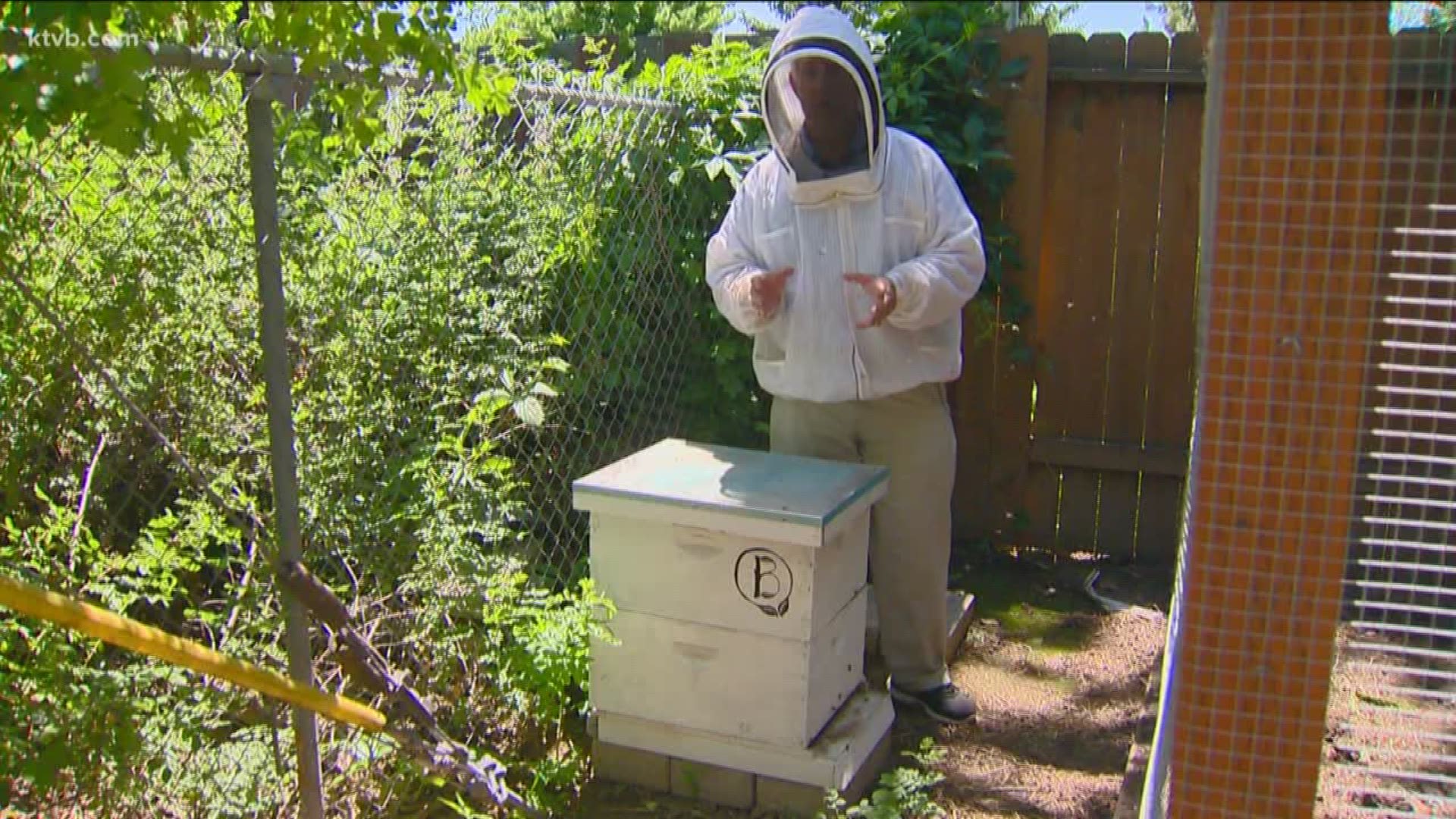 Last week, garden master Jim Duthie told us all about the life of honeybees and explained how important those little insects are to our food supply, by pollinating the plants that produce our fruits and vegetables.

In the second part of his series about bees, Jim puts on a beekeeper’s suit and takes us right into a working beehive and shows us just what it takes to become a backyard beekeeper yourself.

There’s a growing trend across the country these days that’s creating quite the buzz, and it all has to do with keeping beehives in your backyard.

Backyard beekeeping is becoming one of the most popular hobbies in the United States. We’ve joined with the Treasure Valley Beekeepers Club to learn a little bit more about how you can set up your own beehives in your backyard.

RELATED: You Can Grow It: The Life of Bees Part 1

“Well, backyard beekeeping provides the pollination for the plants around your yard and in the neighborhood. So, I think that’s something that attracts people to have any bees in their backyard,” said Beatriz Ayala with the Treasure Valley Beekeepers Club.

And there’s another sweet reward for backyard beekeepers.

“Besides the pollination, you can have your own honey, too,” said Ayala.

So what do you need to know if you’re thinking about setting up your own beehive?

First, find out about any laws or restrictions where you live.

“I would encourage people to look into the city ordinances for having a hive within our neighborhood or homeowners’ association,” said Ayala.

The City of Boise, for example, allows up to three hives on your property, but other Treasure Valley communities and neighborhood associations may have different ordinances.

“And something to be aware about is your neighbors, are there any other bees around the area? Allergies that people have, if they’re severe,” said Ayala.

And then there’s the cost, which can be up to $500 for a brand new hive, including the bees and other equipment. You can find used hives for less money, but you need to make sure they’re clean and disease-free.

“You can order a nucleus hive, which is what we did, and then you can also get a package of bees,” said Ayala.

When setting up a new hive, consider the location. like this one, it should be in a back part of the property away from normal family activity.

This is also a good spot because it has plenty of sunlight, especially in the morning, to warm up the hive.

“And also, you want to have plants, too, for resources, the pollen and nectar. And then you want to make sure they have water around, too, like a little pool of water or something where they can refresh off of,” said Ayala.

“So this is a nice set up like this. Put our base down. Here we have some cinder block. And then you have your bottom board, and that’s the entrance.”

“What we got was a nucleus hive, and that comes with about three or four frames, and you transfer those into this set up. These boxes have about eight to ten frames. So they’re a lot bigger… there’s more room for them to grow.”

“And then when you go in to observe them, you lift off the top of the lid right there, and there’s also an inner lid, and you can take that cover off. Then you can start pulling out frames and checking them out.”

“Boy, the noise level just went up,” said Jim. “So these hives are artificial and they build onto them?"

“So all of this is honey right there.”

The bees are drawn to flowers where they collect the nectar, which is their food.

“Nectar is what is transformed into honey,” said Ayala.

And you won’t believe the taste of freshly-made honey.

“And one of the best tastes I think I’ve ever had is fresh honey right out of the hive,” she said. “Anyone care to try?”

An established hive can produce hundreds of pounds of honey and bees wax each year.

“People interested in beekeeping, I would say, best for them to be a part of a club… Treasure Valley Beekeepers Club is an amazing club, and through that club you get a mentor,” said Ayala.

And by setting up your own beehive, you’ll not only get the reward of collecting honey, but you’ll also help increase the number of pollinators in your own garden, and around your neighborhood.

You can learn more about raising honeybees and establishing your own backyard hive by contacting the Treasure Valley Beekeepers Club.