You Can Grow It: Roasting peppers and chilies

Garden master Jim Duthie teaches us about growing peppers and how to prepare them in your kitchen. 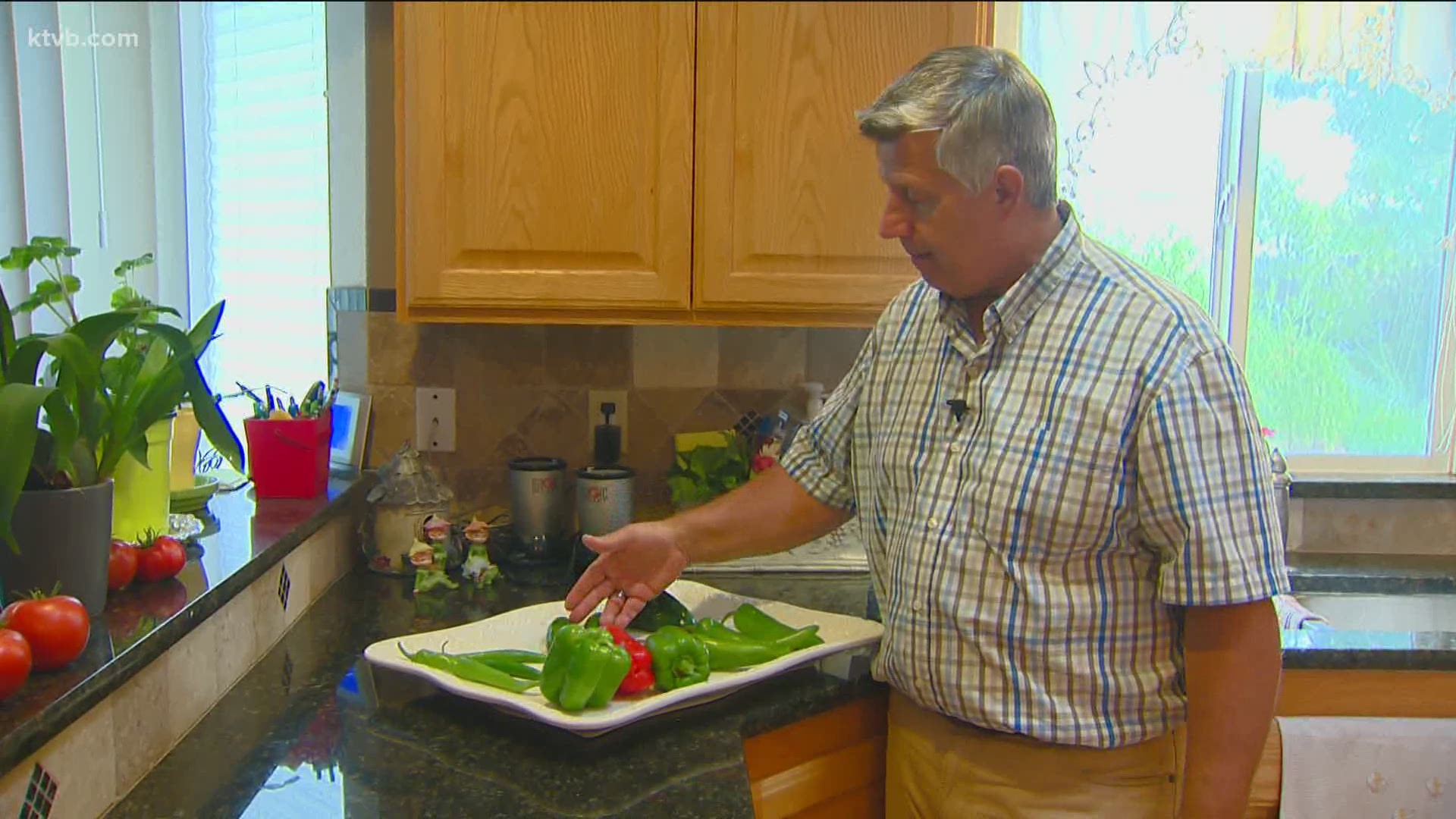 BOISE, Idaho — Did you know that there are nearly 50,000 different peppers and chilies grown worldwide, with new hybrids introduced every year? Each one has a slightly different look, color, taste and spice level.

The variation, however, allows for more creativity in the kitchen.

Some people avoid hot peppers because of that spicy burn. For others, the hotter the better.

What gives a pepper its hotness is something called capsaicin, which is found mainly in the seeds and oils of the peppers. It's an irritant for mammals, including humans, and produces a sensation of burning in any tissue with which it comes into contact, like the skin, eyes, and especially lips and tongue.

Capsaicin is also the main ingredients in pepper spray.

The Scoville Heat Unit Scale, which measures the hotness of certain peppers, was developed by a chemist named Wilbur Scoville in 1912. The scale ranges from zero Scoville Heat Units (SHU), which is equivalent to the heat in a bell pepper, to over one million SHU for ghost peppers, one of the hottest peppers on Earth.

Believe it or not, there are peppers hotter than ghost peppers.

In KTVB garden master Jim Duthie's garden, you will find bell peppers, anaheims, poblanos, jalapenos and serranos. Each one has a different flavor and different heat intensity.

Anaheims are the common green chili. They combine a sweet pepper taste with a small amount of heat. They are long, narrow and are usually harvested before they turn red. You'll typically find them in Tex-Mex dished. They range between 500 to 1,000 SHU.

The jalapeno is one of the most well-known peppers, ranging from 3,000 to 8,000 SHU. Smaller than anaheims and poblanos, jalapenos are more fleshy and often turn very dark or red as they ripen. They are most commonly used in salsa but can also be pickled, stuffed, chopped or dried.

Keeping peppers picked as they ripen will encourage more peppers to develop on the plant. Canned chilis are available in the store, but growing and roasting your own improves the flavor.

You can roast them over an open flame or a barbeque grill, but the easiest way is in the broiler of your oven.

Preheat the broiler to about 450 degrees and set the oven rack about 4 to 6 inches below the heating element.

Wash the peppers and dry them off with a towel. Arrange the chilies in a single layer on a foil-lined baking sheet. Roast them under the broiler for about 3 to 5 minutes, until the skin is charred and blistered.

Using tongs, flip the chilies over and broil them on the other side for another 3 to 5 minutes.

When the chilies are done, remove them from the broiler and put them into a plastic bag. Let them sit for 15 to 20 minutes in their own steam. This will loosen the skin and make peeling much easier.

Remove the peppers one at a time and pull off the loosened skin. You may want to wear gloves if you're peeling quite a few or if you have sensitive skin. Let them cool. You can freeze them whole to use later or cut off the stems and slice them open lengthwise and remove the seeds with a knife.

These roasted chilies are a great addition to scrambled eggs, cornbread, nachos and all kinds of dishes where you want a little taste of the Southwest.

Watch More: You Can Grow It