You Can Grow It: Harvesting hops in Idaho

Southwest Idaho's climate and its proximity to the 45th parallel makes it an ideal place to grow hops, an important ingredient in many beers. 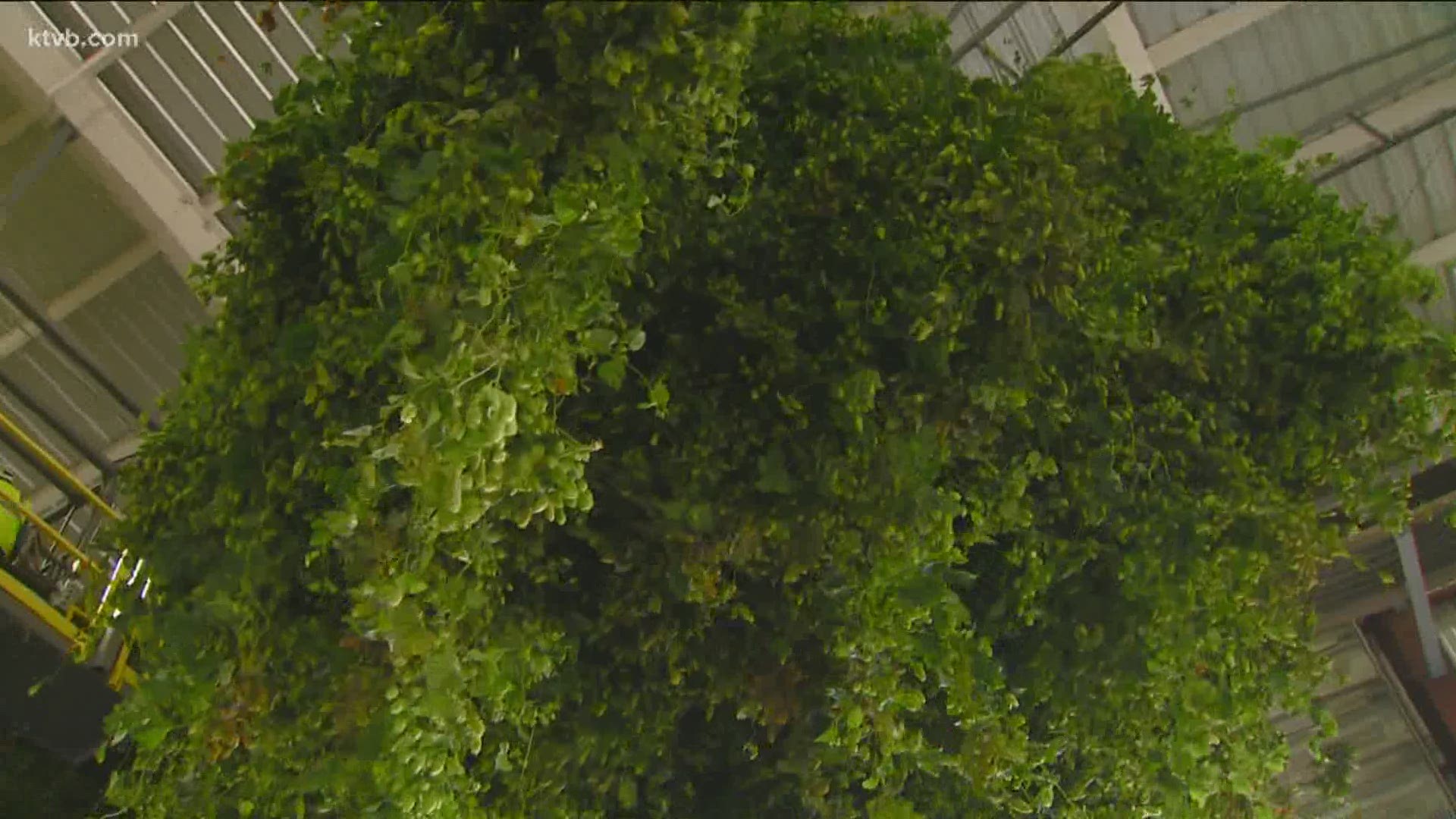 PARMA, Idaho — Have you ever wondered what those unusual looking vines are growing on some Canyon County farms? They’re probably hops, which supply a growing industry of microbreweries in Idaho.

Hops fields are a unique and interesting sight in Idaho’s farm country, with long, straight corridors between high walls of leafy, aromatic vines.

Hops are the flowers of the hops plant and are used primarily as a flavoring and stability agent in beer.

The plants are perennial, which means that they grow back each spring. The fields remain planted for five to eight years, depending on the need for that particular hops variety in the marketplace.

As the shoots emerge, they’re trained to grow up strings to an overhead trellis. The vines, better known as bines, can grow to be well over 20 feet tall.

The plants produce one- to two-inch-long flowers that resemble small pine cones. Each of the scales, or petals, of the flower produces a yellow powder that contains the acids and oils that give the hops their character and flavor.

So why are there so many hops farms in Southwest Idaho?  It has a lot to do with being halfway between the equator and the North Pole.

"The reason hops thrive here, hops are a daylight sensitive crop," said Brock Obendorf, of Obendorf Farms. "They need to be close to the 45th latitude. The lower [latitude] you get, there’s too much day length and the hops will not flower, so you need to have the right day length to flower."

"They’ve got to have a certain amount of freeze nights in the wintertime to be able to reactivate in the spring," Obendorf said. "So this area allows for that."

The main hops growing area in Southwest Idaho is in Canyon County, particularly around Parma, Notus, Wilder and Greenleaf. But neighboring states actually have a larger hops industry.

There are four main varieties of hops grown in the region – Galena, Nugget, Chinook and Zeus - and each one has been developed for the distinctive flavors they give to beer.

Late summer is harvest time for hops. The vines are pulled down and transported on trucks to a separation shed where the hops flowers are removed.

The flowers go through a series of steps to clean the hops, removing any unwanted plant material and other debris. Then the discarded leaves and vines are chopped up and set aside to be used for cattle feed.

Next, the hops are transported by conveyor to a drying facility. They come in with a moisture content of about 75%. They’re dumped into huge drying vats about three to four feet deep, and each drying vat holds about two acres’ worth of hops.

Warm air, at about 135 degrees, is forced up through the floor of the vat, where the hops are dried to about 9.5% moisture content, a process that takes about eight to ten hours.

From here, the dried hops are taken to the packing shed, where a slot in the floor pushes air up through the pile of dried hops to cool them back down. They’re then scooped into a machine that compresses them into 200-pound bales, which are wrapped and ready for shipping.

So who buys these Idaho-grown hops?

"A lot of microbrewing, a lot of big breweries," Obendorf said.

That includes a growing microbrewery industry in Idaho, as well as throughout the world.

"Our hops are all over the world," he added. "They go to brokers, and then they’re distributed everywhere."

Hops are also used in herbal medicine as a treatment for anxiety and insomnia. A pillow filled with hops is supposed to be a remedy for sleeplessness. And hops can also be eaten. The young shoots of the vines are edible and can be cooked similarly to asparagus.