You Can Grow It: Amazing displays of fruits, flowers and vegetables at the Western Idaho Fair

You can get lots of good ideas for your garden at the fair. 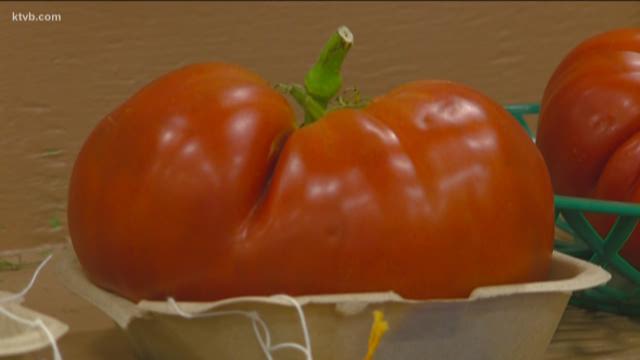 The Western Idaho Fair gets underway this weekend and runs through next weekend. There’s so much to see and do, and taste, at the fair. But for Idaho gardeners, the horticulture displays are a fan favorite, with some of the best fruits and vegetables and flowers that Idaho can produce.

Garden master Jim Duthie shows us some of the amazing entries from previous years, so you’ll get an idea of some of the things you’ll see at this year’s fair.

The Treasure Valley of Southwest Idaho is one of the most diverse and productive agricultural areas in the country. We grow hundreds of different fruits, vegetables and grains here, many of them in our own backyard gardens, as well as a wide variety of beautiful flowers. Here’s an idea of the types of things that you’ll see on display at the Western Idaho Fair – some of the best that Idaho gardeners have to offer.

When it comes to growing fruits and vegetables, idaho gardeners grow just about everything. but in this division at the Western Idaho Fair, size matters.

This is the display showing the largest and heaviest of everything from beets to eggplants to canteloupes and cabbages.

“We got about 150 exhibitors that brought out almost 1,300 exhibits,” said agriculture coordinator Hans Bruijn.

Like these zucchini. Some of them are almost three feet long. And some of these cucumbers are almost as big.

And then there’s this monster of a watermelon, coming in at over 100 pounds.

This onion weighs in at a couple of pounds. Take it along with this super-sized tomato, and they’ll handle all the hamburgers at your next cookout.

Giant pumpkins are always a fan favorite, and often tip the scales at almost 300 pounds. But occasionally there are even bigger ones.

In 2015, this giant pumpkin weighed in at 544.5 pounds, and had to be brought in on a forklift. No surprise – that one took the blue ribbon.

The judges certainly have their work cut out for them. There are more than 350 categories in the agriculture division alone.

They’ve got to decide which entries get blue ribbons for first place, red for second, and white for third, plus some honorable mentions.

None of these fruits and vegetables would be here if it weren’t for the honey bees, so there’s also a division for honey and beeswax products.

There’s also a division for young gardeners under the age of 17.

“And there’s always quite a bit of youth that enter in that department, to show off their pumpkins and green beans and whatever else,” said Bruijn.

Then there are the flowers and decorative garden displays, using all kinds of things as creative containers.

“The people are so inventive," said Bruijn. "You’ll see Julius Caesar over here with a head full of succulents. Some very cool massive logs where people planted succulent gardens. You’ll also see in our fairy and novelty gardens, miniature gardens, that there are some great things.”

“Here we have a blue ribbon winner made out of an old dust pan.”

“You’ll also see that a child’s old Tonka truck has been converted to a succulent garden.”

An old tree stump was transformed into an exotic garden, even though it’s filled with common, everyday succulent plants. It won multiple ribbons.

“Just inventive, creative, nothing hard… just all you need is your imagination,” said Bruijn.

It’s too late to enter the fair this year, but you can get ideas and inspiration for next year. And you can show everybody that you can grow it.

The Western Idaho Fair runs from August 16-25. You’ll find the agricultural exhibits in the Expo building.

And by the way, Monday, August 19, is KTVB Family Day, with discounts on fair admission and ride tickets.