Diagnosed with autism at the age of three, 7-year-old Max Bingham earned an Idaho State Police escort and a welcome celebration at school for his fundraising. 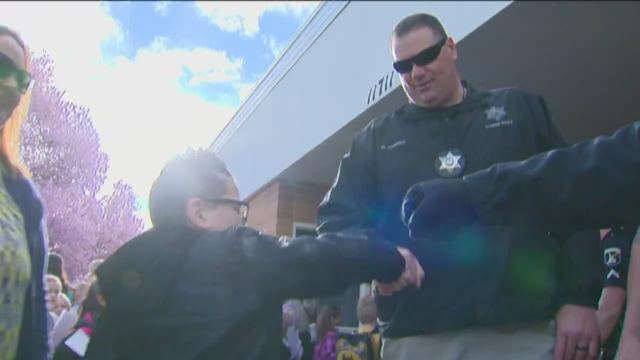 BOISE, Idaho — April is Autism Awareness Month and throughout the month autism fundraisers, events, and special opportunities to help recognize people in our community who are on the autism spectrum.

KTVB is recognizing a little boy with autism at Lake Hazel Elementary who did something pretty amazing at his school.

Seven-year-old Max Bingham of Boise was diagnosed with autism when he was three years old but that hasn't stopped him from making huge strides since then.

“At that time, Max was non-verbal, extremely aggressive and it was really hard to engage with him," Hayley Bingham, Max's mom, said. "Early intervention helped with this, therapies, at home strategies, constant trial, and error, many tears."

He’s now a first grader at Lake Hazel Elementary and his parents say the school has been a huge blessing to their family.

“This school is more than just a school. It's a family, it's a community. They love Max and we just cannot say enough nice things about it," Hayley said.

Max recently accomplished something big, for any kid, by selling 1,425 candy bars for the school fundraiser. All candy bar sales go directly back into the elementary school.

“They just finished up a fundraiser where he set the record for the most candy bars ever sold at the school," Hayley said. “He actually stepped out of his comfort zone this year. He sold candy bars door to door. He’s so cute. That's really the secret. People love him.”

After Max sold the candy bars and set a school record, the Idaho State Police rewarded him with an escort to school.

Colonel Kedrick Wills, the director of Idaho State Police, and his brother Kyle Wills, who is an Idaho State Police Trooper, showed up at Max’s house to give him a ride in a special old fashion police car. He also had a group of ISP troopers on motorcycles lead the way.

Credit: KTVB
Max Bingham was escorted to Lake Hazel Elementary in this 1947 Idaho State Police patrol car. It was driven by Colonel Kedrick Wills, the Director of ISP.

“It’s a 1947 model year, it was originally a patrol car for the Idaho State Police. We get to pull it out for parades and things like this," Wills said. "I think Max really enjoyed getting to ride to school and using the siren as he got to ride into school grounds."

Credit: KTVB
Max Bingham was welcomed to Lake Hazel Elementary by students and staff members, it was a big celebration.

When Max arrived at Lake Hazel Elementary in Boise, students were lined up out front, cheering his name.

Law enforcement officers from Meridian Police Department, Boise Police, and the Ada County Sheriff's Office were also at the school to welcome him.

It was a lot of attention for anyone, but Max said it felt great and loved every minute of it.

Lake Hazel Special Education Paraprofessional Cassie Thompson works with Max at school and she says the progress he has made is just incredible.

“Nothing is impossible for that kid," she said.

Max's parents are so thrilled to see all of the barriers he has overcome, and all of his success. They know Max’s future is bright.