Meridian Canine Rescue has officially gone to the dogs while humans spend the night living like shelter dogs. 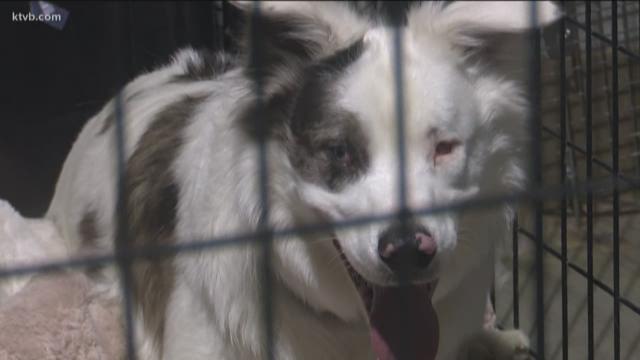 MERIDIAN, Idaho — For the next 24 hours, five rescue dogs at the Meridian Canine Rescue will have human roommates in the hopes of finding a forever home.

South, Tink, Buddy Boy, Russell, and Mae are being showcased because they've all been in the adoption system for a while or just haven't garnered as much interest as other adoption-ready animals.

Volunteers staying with the dogs overnight will live exactly like the shelter dogs.

South's new roommate is Angela Taylor, who has participated in the sleepover event four times.

"He's a transfer up from Texas and in Texas, he went into the shelter in July 2017 so he's only been with us for about 55 days but he's only around three [years old] so he's been in a rescue for two-thirds of his life," she said.

The human volunteers will take pictures and videos throughout the 24 hours and post to social media to give the community a closer look at their furry friends.

The volunteers say it's a fun event, but it's also eye-opening.

RELATED: 'It's almost like being in a microwave': Animal control warns people not to leave pets in hot cars

"The first time that I did it, it was fun and we were laughing and everything. The closer and closer it got to the end of the 24 hours, you could hear people starting to sniff and kind of cry and it was just so emotional and we weren't expecting it," Taylor said. "But you felt so bad leaving them because you knew what they were going through and what it was like."

Alex Roe owns Shadow's Paw Wash, who does a lot of work with the rescue. He said he decided to participate in the event this year to see what it was like, and hopefully encourage others.

“I hope they kind of see my story and see me going into a kennel and relating what the dog goes through and maybe they’ll think differently or they might think, ‘Hey that dog is really cool and that dog’s for me,’” he said.

Since Through Their Eyes started in 2017, it has seen continual success with the featured dogs being adopted during the event or just days after.

Ewing said the community's response has always been positive but a little bit surprised.

"They're a little bit shocked that we're doing this and that we like to live in the kennel with the dogs for 24 hours but we absolutely do and so we'll keep this event going for a long time since everyone loves it so much," she said.

To donate to the fundraiser for Through Their Eyes, go here to the website.