Chad Smith and Isaac Baker were part of the team that rescued a couple and two dogs from a truck dangling over Malad Gorge on Monday. 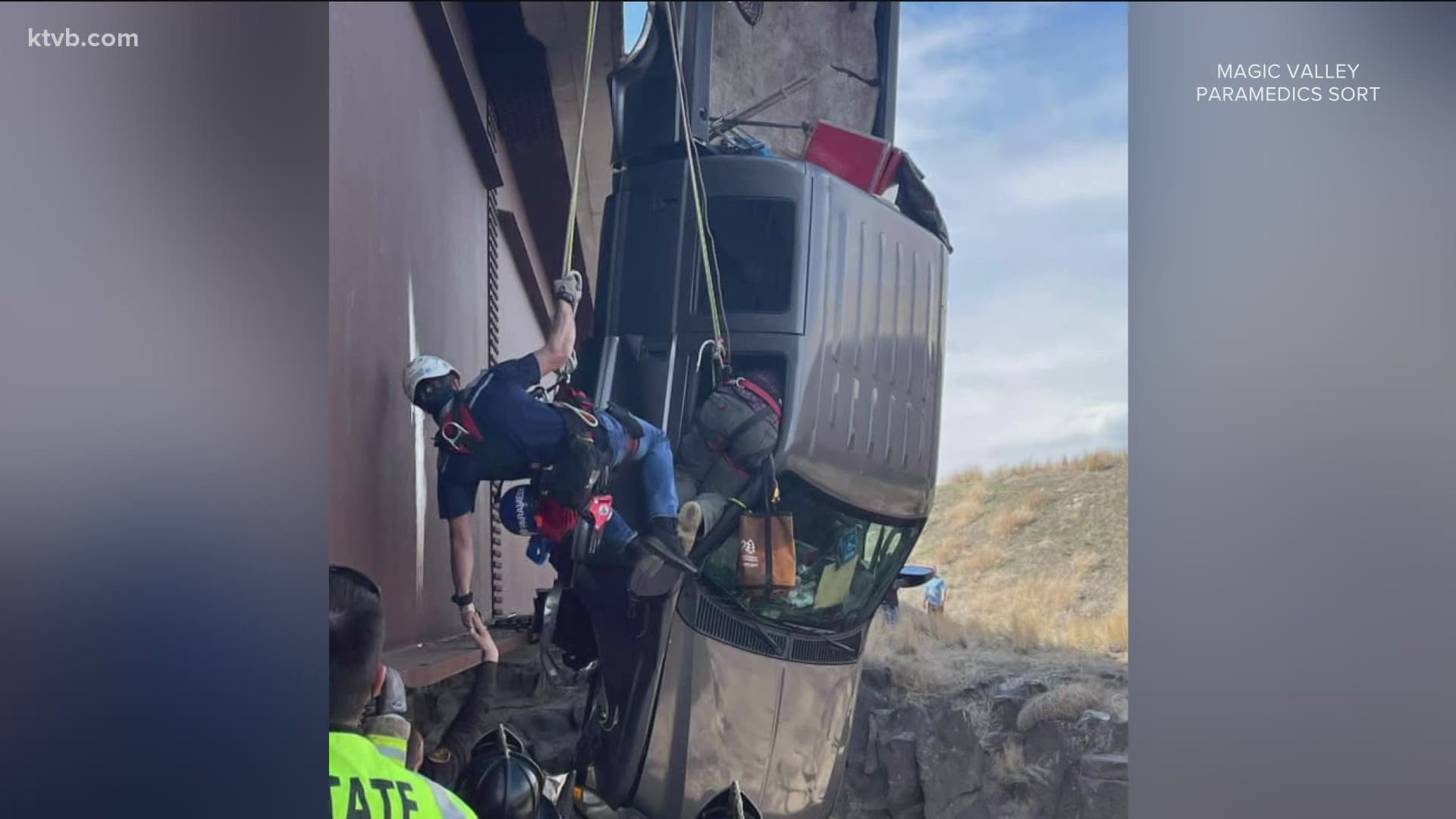 IDAHO, USA — On Monday afternoon, a Ford F-150 pickup truck hauling a camper trailer crashed on I-84 in Southcentral Idaho. The truck ended up going over a bridge above the Malad Gorge.

Witnesses said the driver of the pickup lost control and swerved right, hitting the right shoulder of the interstate. That initial hit caused the truck to slide on the left guardrail and ultimately tip over the bridge.

Only the safety chain attached between the truck and camper prevented the two people inside, a 67-year-old man and a 64-year-old woman both from Garden City, and their dogs from falling into the gorge.

"When we flew over the helicopter and saw it hanging there by a chain, we knew we had to move super fast once we arrived on scene," said Chad Smith, field supervisor for Magic Valley Paramedics Special Operations Rescue Team (SORT) and flight paramedic for Air St. Luke's.

Smith was one of three rescuers who rappelled down to the hanging truck. He was the first one over the bridge, and within six minutes, he was able to make contact with the couple inside.

"Having vehicles over the edge, we know it's crucial to get there as fast as possible for the best chances of getting people out," Smith said. "They were definitely freaking out. I can only imagine what it's like hanging there looking straight down into that canyon."

Making contact with the victims was difficult for the rescue team. Getting them out, however, took even more time and careful work.

"It was difficult to get in [to the truck] due to the accident," Smith said. "There was major damage to the pickup and we weren't able to get the doors open, so we had to break a window out and go through the window which made it a little bit harder to work."

"Luckily there was a semi-truck driver that had come up and chained his semi to the vehicle as well," said Isaac Baker with Magic Valley Paramedics SORT. "But it still wasn't fully secured as much as we wanted it."

One hour and eight minutes after the initial call to Idaho State Police (ISP), the couple and their dogs were safely rescued.

"Seeing the teamwork and the coordination and how well it went,  I'm super proud of our team and our resources in the valley, and because of that a family gets to go home at the end of the day," Smith said.

The couple was taken to a Magic Valley hospital and treated for non-life-threatening injuries. It is not known if they are still in the hospital at this time.