ONLY ON 7: Idaho doctors operate on, save famous Bengal tiger

For "The Authentic Illusionist," Jay Owenhouse, and his family, twin Bengal tigers Shekinah and Sheena are more than just an act in a show. They're family. 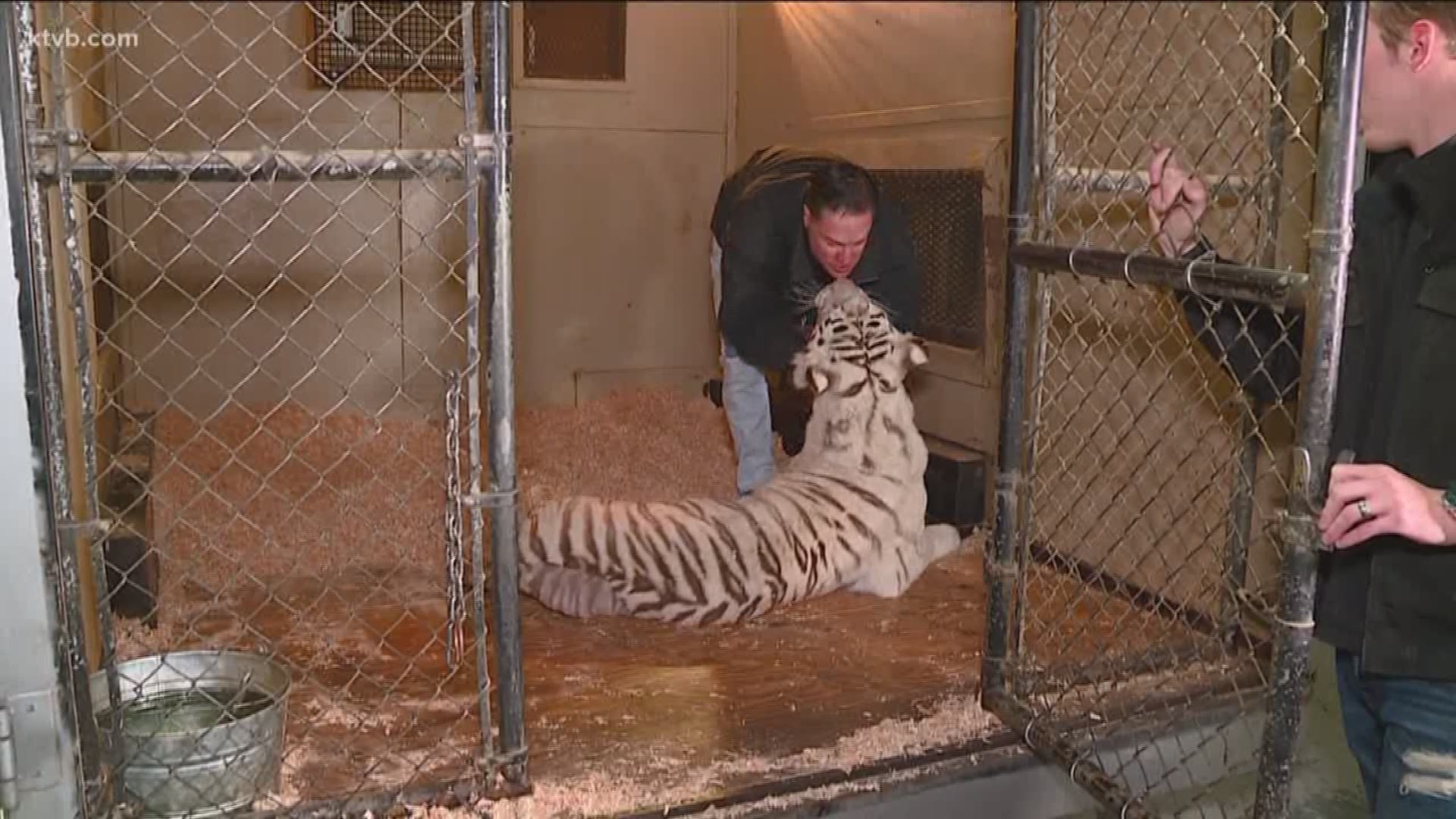 SUN VALLEY - It was a once-in-a-lifetime opportunity for two Idaho surgeons - one for animals, the other for humans. They were sought out by a famous illusionist in Montana to save something precious to him - his tiger.

They all met up in Sun Valley, where they operated on the rare 8-year-old Bengal tiger for almost three hours, reconstructing her broken femur.

KTVB's Morgan Boydston and photojournalist Mary Kienzle made the trek out to the Big Sky State to meet this magician and his family and their two beautiful Bengal tigers. We wanted to learn about "The Authentic Illusionist", Jay Owenhouse, and find out why he owns these animals. What we discovered was they're more than just an act in his show - they're family. And he'll go to extreme measures to care for them, hence how his path converged with a Saint Alphonsus surgeon and a Sun Valley veterinarian.

Twin Bengal tigers Shekinah and Sheena have been a part of the Owenhouse family for eight years and a part of the family's livelihood for almost that long, as they perform magic and illusion shows around the country on weekends.

One day in the middle of February, as they were about to leave from their Montana facility, Jay realized something was up.

"Shekinah was in her cave, she has a rock cave and she didn't want to come out. And that was kind of unusual because usually they're very excited to go. And it's always their choice if they want to, we never force them to go," Owenhouse said.

When she did step out of her cave, she was limping.

"I immediately talked to our vet and we thought, well maybe she had pulled a muscle in her leg. And tigers tend to heal pretty fast so we just kind of kept an eye on it for a couple days. She didn't seem like she was in a lot of pain,"

The vet evaluated her again and the consensus was that the injury was muscular.

But after another week, Shekinah wasn't getting any better so X-rays were done on Shekinah's right leg; the scans revealed she had shattered her femur.

"Being twin sisters they like to play a lot and we think what happened was Shekinah was up on top of the waterfall - there's kind of like an area to lay up there - and her sister came up and wanted to get a game going and somehow knocked her off. It was just a freak accident where she just landed and hit her hip," Owenhouse said.

This was shocking, Jay says, because Shekinah and Sheena's bone density is outstanding.

"Kind of the consensus was that she probably would have to be put down. And that was just something we weren't going to accept because she's part of our family," Owenhouse said with tears in her eyes, "If her femur could be repaired and she could live a life without pain then it was worth any cost to fix it."

He got a team of local experts together and they searched far and wide for the best veterinary surgeons in the country. But fortunately, they didn't have to search too far.

"It turned out the best one was actually in Sun Valley, Idaho. Randy Acker, who is regarded as one of the top orthopedic surgeons in the country," he said.

He knew he had to use a specialized interlocking nail to fix her femur, but the dilemma was they didn't make parts big enough for a tiger in veterinary medicine.

So Dr. Acker connected with Saint Alphonsus director of orthopedic trauma, Dr. David Zamorano who, prior to this, only worked on humans.

"I told him I don't really know much about tigers. And so he sent me some X-rays, I took a look at them and I told him it looks just like a human femur. I think you probably can fix it just like you would fix any human," Dr. Zamorano said.

Within a couple days, Dr. Zamorano got a team together, stocked a pickup truck with medical equipment from Smith & Nephew, and headed to the Sun Valley Animal Center.

"It's called a META-TAN Nail. We make a little hole in the top of the bone and these screws come out, we put the rod all the way down the femur then we put a screw at the bottom and a screw at the top. And this rod is really strong. It's made out of titanium so you can't bend it so this allows the tiger to walk on it from day one," Zamorano said.

"The physicians were integral to get the right part," Acker added.

An unlikely combination: human surgeons and equipment representatives from Boise, an anesthesia team from Montana and a veterinary team in Sun Valley all uniting to save a rare, endangered white Bengal tiger.

"I just thought it was an experience of a lifetime that I get to see an animal up close that I will never see up close," Zamorano added. "It's kind of surreal."

"It's part of the universe, it feels funny to cut on it but I'm honored to try to help it," Dr. Acker told KTVB. "Mother Nature and time have been fixing broken legs for a long time but they're not necessarily very functional."

The surgery was difficult for a few reasons: the fracture was about three weeks old so it had partially begun to heal in a bad position, along with the tiger's bones being so dense.

For the Idaho surgeons, it was a race against time, and the finished in about three hours.

"For humans pretty much you can go until you get everything perfect. I've had some surgeries that have gone really long and some that go really quickly. And for her the anesthesiologist said you've got about five hours max so you need to get it done by then," Zamorano said.

"It's just scary enough that when it's done it's, whew, you made it through that one. Sort of," Acker said.

"It was a tough day but it also was a good day because I knew that if it wasn't for the surgery that she wouldn't have had a chance to survive," Owenhouse told KTVB. "It would have been inhumane to let her live without having reconstruction."

Two weeks later, Shekinah is still healing and resting in a make-shift bed in her trailer, but away from her twin sister to avoid hurting her leg again.

"They've spent eight years together and so it's really the first time they've been separated since Shekinah's surgery," Owenhouse added. "Her sister Sheena I think is very stressed about it. So she is concerned about her sister, I think she misses her."

As of Tuesday, we're told Shekinah just started bearing weight. Jay and the surgeons are hopeful she'll make a full recovery, and believe she is in great spirits and feeling well.

"It was such a blessing to have so many people want to be part of giving her that second chance," Owenhouse told KTVB. "We really feel like it was divine intervention that this team came together with such enthusiasm to take on this very difficult challenge of rebuilding a tiger's femur."

The surgery was a second chance for Shekinah that both Dr. Acker and Dr. Zamorano say they were honored to lend their hands to.

"He spent a lot of time, money effort to doing this. And you can tell he just really cares about the tiger," Zamorano said.

"That guy definitely loves that cat. It's not just a tiger, it's part of his family."

Owenhouse says one of the main reasons he has these tigers in his show is so he can educate people about conservation and just how special they are. But he also says they love to perform

"It's their choice if they want to go [to the shows]. They can go or they can stay. I've never had a tiger not want to go because we make it fun for them... What they do in the show it's by their choice, they're not coerced to do it," he said. "For us they're not props in our show, they're not working animals. They are part of our family and they have been since the day we adopted them."

A species in crisis Jay Owenhouse, The Authentic Illusionist, says he - and his family - are dedicated to saving by fusing his love for animals with his passion for magic.

"A famous conservationist said once, 'we only conserve that which we love'.' So I think it's so important people get an opportunity to be around these magnificent animals because it changes their life. And I think it heightens people's awareness of the plight that the tiger and a lot of other animals are fighting,"

A fight that this tiger will continue to bring attention to thanks in part to two Idaho doctors.

A portion of the proceeds from the show's VIP experience currently go to the Corbett Foundation to help conserve and protect tigers from being poached in the wild.