A television and movie star with Idaho roots is back in his hometown this week for the premiere of his new film, "Triple 9." 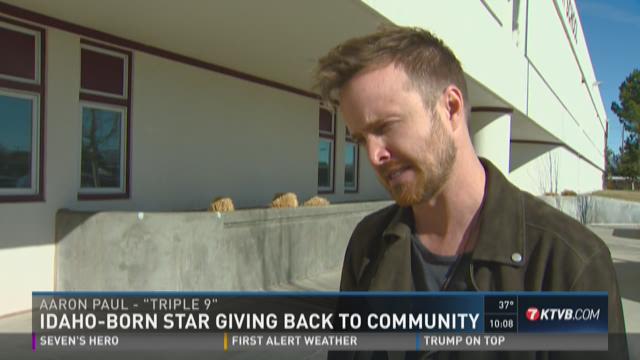 BOISE - A television and movie star with Idaho roots is back in his hometown this week for the premiere of his new film, "Triple 9."

Centennial High school grad Aaron Paul was making his rounds across the area on Tuesday giving away tickets. He made a special appearance at his alma mater, and KTVB took to social media to track him down.

We were able to catch up with the humble actor to talk about his love for the Gem State, and deep gratitude for a high school drama class.

Centennial's "Image Factory" churns out more than state drama titles and Shakespeare plays; it churned out a movie star.

"I was a drama nerd," Paul exclaimed. "I came down to Centennial, I surprised the kids in the Image Factory - that was an acting class."

Paul, best known for his role in the Emmy-winning show "Breaking Bad," is popping up in places all over the area this week.

"Boise is just, it's magical. Idaho is magical. I'm so unbelievably proud to be from this state," Paul told KTVB.

He says he and his wife just bought a house here a year and a half ago, calling the Gem State home once again. At his alma mater on Tuesday, Paul spoke to aspiring actors standing on the same stage he starred on years ago.

"I really am just all about encouraging arts to stay in school because without that I definitely would not be doing what I'm doing, and I love it," Paul said.

"It's just cool to see that someone started out here and could make it big like he did. It was really inspiring," Raymes said.

The star's success is encouraging students to follow their passion, and learn as much as they can through the arts.

"What he provides them is the ability to understand: If you have a goal, if you have a dream, then you can reach it," Centennial Theater Arts teacher Sterling Blackwell said, adding, "that it starts right here in high school."

Paul has a strong message about programs like drama being at the core of education in Idaho.

"Please do whatever you can to keep arts in schools. I think it's very important."

The actor gave Image Factory students tickets to the screening of his new movie.

KTVB will catch up with him Wednesday night before the thriller premieres at 7:30 p.m. at the Egyptian Theatre in downtown Boise. Stay posted on the star's social media because he will be doing a scavenger hunt around town, giving away more tickets.