From WWII's Pacific Theater to Syria, Idahoans who served share their stories on Veterans Day

Around 50,000 veterans live in the Treasure Valley, and about 115,000 live across Idaho. But those numbers don't tell the complete story of Idaho's veterans. 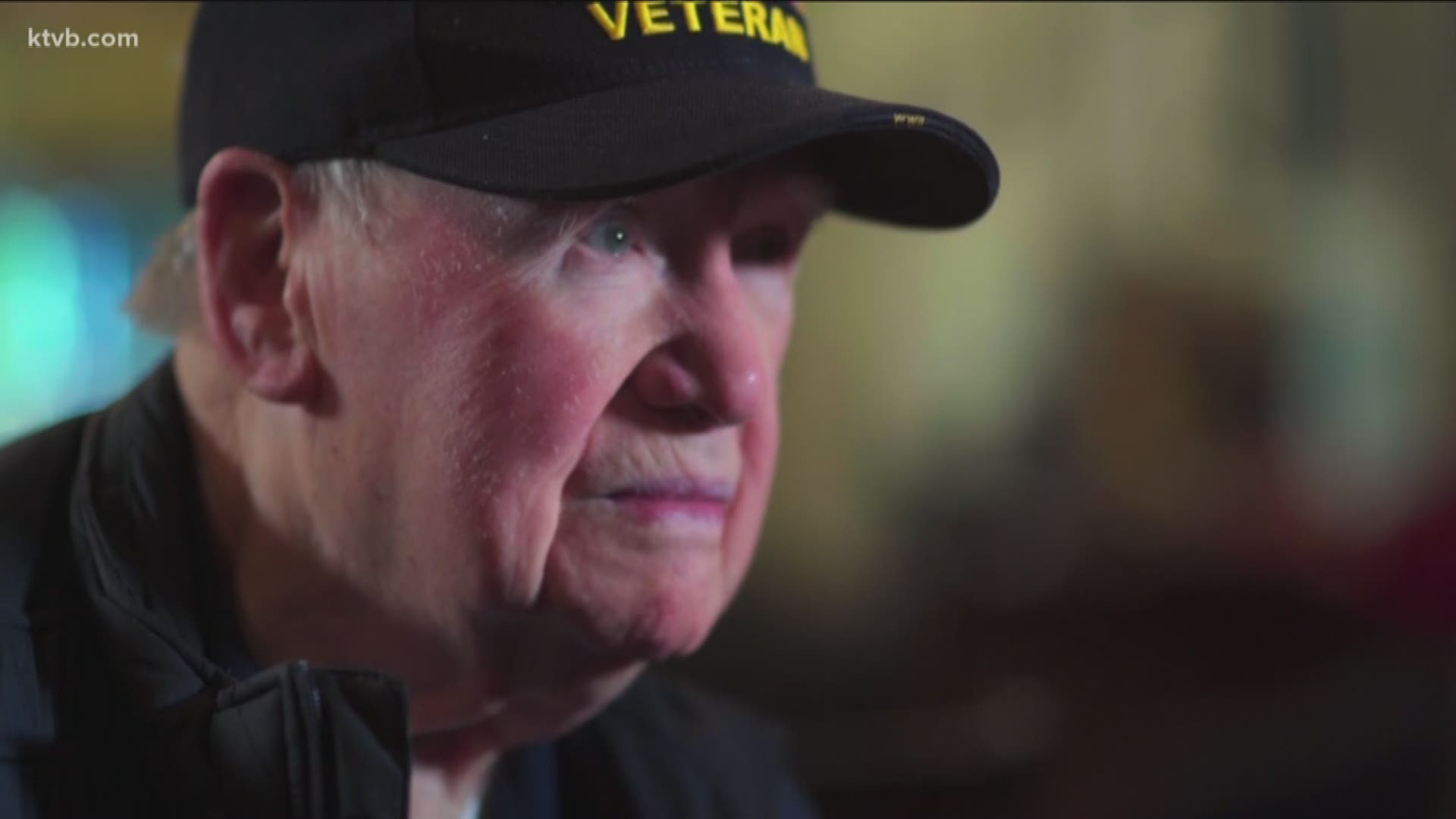 BOISE, Idaho — More than 18 million veterans live in the United States, with about 115,000 living in Idaho, according to most recent U.S. Census data.

In the Treasure Valley alone, about 50,000 veterans call the area home.

According to the National World War II Museum, there are about 2,700 veterans from the Greatest Generation living around the Gem State, which is a figure that shrinks every day.

Numbers and statistics of Idaho's veterans only tell a small part of what it means to be a veteran.

For Veterans Day, KTVB sat down with six Idahoans who served from the Pacific Theater in World War II to fighting on the front lines against ISIS in Syria, to let them tell their version of being a veteran.

Wallace Wright Jr. served in the U.S. Navy for eight years said, "When I was 16 I told my mom, I said, 'Mom, I gotta get out of here, I just have to get out of here.' I liked the navy, I like it very much the navy made a human being out of me."

"I always wanted to join the military, ever since I was a little kid pretending to be a grunt, you know, running around with sticks and stuff," Colton Nelson, who served four years in the United States Marine Corps, said. "I remember all the aftermath of 9/11 and I guess you could say that's kind of where I built most of my ambition to go was the aftermath of 9/11 and how unified the country was and supporting the war effort and everything."

RELATED: Why is Veterans Day celebrated on November 11?

Judith Amy served in the U.S. Navy Nurse Corps and was stationed on the USS Repose, which was on station in Vietnam.

"So the plane is landing in Denaghng, and there are all these towers around with uh...with guards protecting the planes because it was a hot target, and so they said, 'You need to get off the plane as quickly as you can, get away from the aircraft,'" she said. "Yeah, the base I went to in '68 was the most hit base with mortars and rockets in the whole country I thought, 'Well, I guess they sent me here for a reason.'"

Robert Kenneth Kean, a United States Air Force veteran, was stationed at the Bentooey Air Base in Vietnam.

"I know when the plane landed in Saigon and as I was starting to go down the stairs I saw a jeep down at the bottom with a machine gun mounted on the back and that's when I guess reality kicked in you know, 'We're not in Kansas anymore.'"

RELATED: Lots of freebies and discounts available to veterans on Veterans Day

RELATED: Remember this Marine and his wife? Generous donors are making sure they get their dream home in Eagle

"By the time we got in-country, Mosul had just been captured by the Iraqi government and isis was kind of retreating across the Euphrates River Valley and Anbar into Syria," Nelson said. "I mean yeah, there was a period of time where we didn't really know what was going to happen next, it was kind of like a tinderbox that was getting ready to be lit on fire."

Leroy A Olson enlisted in the U.S. Navy at the age of 17.

"A friend of mine told me that we were going to send a flotilla of destroyers in Tokyo and I had better get in before the war's over," Olson said. "So I got in. I served on a landing craft infantry and what we did was pick up troops in staging areas and landed them on hostile beaches."

For Amy and Olson, their experiences while serving were something out of a movie.

"I would probably say most of the time I felt like I was in a movie," Amy said. "That it wasn't really quite real, that this was just something that you only see on the screen."

"The war was like a big movie except when you got hit, that seemed to be it," Olson said.

Wright's experience was much more harrowing.

"It was Inchon harbor in Korea," he said. "And uh one of the minesweepers either got hit or blew up or something. We were fairly close to it and I and a couple of guys jumped in to help them out you know? I had my first one in and went back for the second one and then that's when our ship got hit and I got hit in the stomach and I got shrapnel in my left leg in four or five places."

During his tour, Wright said he always looked forward to receiving letters from home.

"At least once a week I could expect a letter from mom and I'd look forward to it after a while," he said. "Of course there were no phone back in those days our family didn't have a phone."

For Nelson, talking with his family while he was overseas was also something he enjoyed.

"Even while I was in Syria they brought out a wifi station for all the troops and you could go there and I could call my family I could call my wife and talk to them pretty much on a daily basis which was fantastic," he said.

"The way we worked on the ship, you're 12 hours on, 12 hours off, that's just what you did," Amy said. "So I spent a lot of time with them and it was just really an amazing experience."

Each of the veterans had different experiences coming home from war.

"We conquered New Guinea and the Philippines I was practically on every invasion in the Philippines, I hit every island," Olson said. "And we did win a war, that's the whole point."

Amy said, "It looked like we lost that war because North Vietnam did take over, and America doesn't like losing and so people who lose are losers and I think that was part of the philosophy too, that if we had been victorious that would have been a different story too."

"I think it was tougher coming back than it was over there granted you were dodging munitions," Kean said. "But the way a lot of the guys were treated when they came back wasn't right."

"Our soldiers and marines would be on Liberty at the hospital in Oakland and then they would go to Berkely... Get beaten up and assaulted and accosted and so forth, and so I knew about that, but somehow I thought it would be different for me," Amy said. "And I really thought that other nurses would want to hear about the experience, you know, just professionally. It was actually something that you didn't talk about. Nurses quickly learned 'Don't talk about it.'"

"I think it would help if they understood more, even guys today they're coming back beat up, shot up, what have you," Kean said.

"I didn't want anybody to look on me as maybe being a wartime hero because I was really nothing you know," Wright said.

Wright, Olson, and Kean all said they would do it all over it again if they could.

"Would I do it again?" Wright said. "I'd do it in a heartbeat again, never ask a question why, yes I would, I would be proud to, I'd be very proud to."

"You know the situation had to be taken care of and essentially, I assume I helped take care of it," Olson said.