'I was still madly in love with this woman': Boise man shares journey through vulnerability, love

It's a love story 35 years in the making. 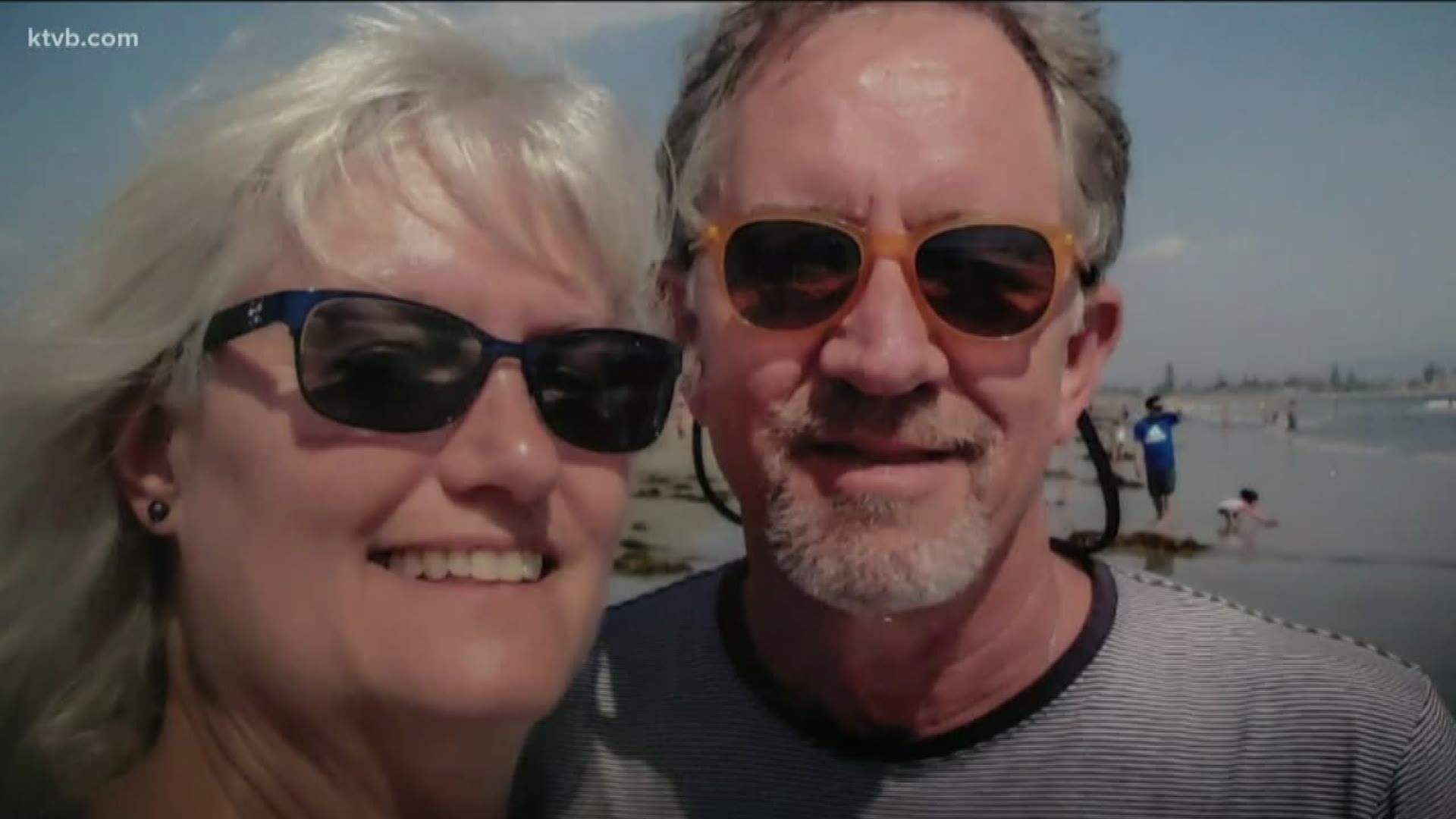 After a year-and-a-half of dating in college, Charles Hoffman let Valerie Jones slip away.

She joined the Navy, and he had school to finish. They lost touch, and years of no contact slipped into decades.

But for this couple, the story wasn't over.

Five years ago, Hoffman - by then living in Boise - had an idea.

"I found her on Facebook. I left a message on messenger, and I figured, 'oh she's married, she's got kids, she's happily married,'" he recalled. "I didn't hear back from her. I thought, 'I'm fine - it's OK. I'm glad she's happy, I hope she's happy.'"

He put the message out of his mind. But then, on New Years Day 2017, he got a response.

Jones says she hadn't ignored that message from her one-time boyfriend.

"Well, I was a little embarrassed that I hadn't noticed it," she said. "I was traveling internationally, so that was my reason."

The conversation flowed easily. And Hoffman soon learned that his assumptions about his former flame's life were inaccurate.

"I think we were probably 45 minutes into our conversation before he realized that I wasn't married, and that changed the whole dynamic of the conversation," Jones said.

"I'm realizing I was still madly in love with this woman," Hoffman said.

After just six months of talking, Hoffman was on Jones' doorstep in Broomfield, Colorado.

She remembers being nervous about the meetup.

"I was looking forward to seeing him, but obviously there's a lot of anxiety in that because I wasn't 20-something anymore," Jones said. "It's a funny thing - once you're actually in the presence of that individual, the one thing that doesn't change is the voice."

RELATED: Man battling Alzheimer's pairs with pianist to save a life's worth of original songs

She shouldn't have worried.

"She was everything I remembered," Hoffman said. "We just started over again."

The pair says their connection - or re-connection - was immediate, even 30-plus years later.

"I didn't know what [our] futures were going to look like, and at that point, I couldn't even think about it," he said. "It was just nice to have her back in my life."

Things were good. The distance didn't matter. Hoffman and Jones continued visiting one another in Boise and Broomfield.

But eventually, Hoffman's past began to catch up with him.

"It was a tough time, because I was just finishing up my divorce. It was a 20-year marriage and it just didn't go well," he said.

Hoffman began to realize that his upbringing was continuing to affect his behavior - even into his 60's.

"I grew up in a German Catholic family, we had an alcoholic father who was very violent, very mean, and you just assimilate a lot of shame by him," he said. "And what I had discovered with myself in all of this is that I wasn't able to be vulnerable."

It's worth the question - what do shame and vulnerability have to do with anything?

According to Brene Brown, a research professor from the University of Houston's graduate college of social work, our fear of being vulnerable is why we as humans find it so hard to truly connect with one another.

Brown spent a decade studying vulnerability and shame, and shared her findings in a viral 2010 Ted Talk. She says we all have experiences in our lives that give us shame.

Our natural instincts are to push that shame down and never talk about it. But the further we push it down, the less happy we are.

Brown says vulnerability is the birthplace of love, joy, creativity - and most importantly - fulfillment. We have to let ourselves be seen to heal our own shame.

Hoffman stumbled upon Brown's video, and took that lesson to heart.

"So what I learned was, I need to deal with my shame issues and get to the place where I can relate to and engage with this woman that I care very much about, and anybody else that comes into my life," he said. "I was 63 at the time and I'm thinking 'I'm not getting any younger, and I really want to figure this out before I get too old.'"

"It was my last chance."

So about a year ago, Hoffman and a friend made a pact: Every Thursday morning, they would meet up and help each other work through their issues and painful memories, with the goal of opening themselves up to vulnerability.

Credit: Chase Biefeldt/KTVB
Charles Hoffman said he made a conscious decision to open himself up to vulnerability.

It wasn't easy, he says.

"It was anger, it was sadness, it was laughter, it was tears - Bill and I literally forced ourselves to be vulnerable with one another and work out all these memories we had," Hoffman said. "His were just as ugly as mine were, but we stuck it out, almost a year to the date. It was probably the hardest year of my life."

But looking back, he says, it was all worth it.

Vulnerability carried them through it. And Hoffman finally felt ready to ask Jones a big question, for the second time.

"I reminded her [about] 30-some years ago when I asked her to marry me the first time," he said. "I offered her the ring and said 'I want to marry you -  now remember, you did say yes to me once before.' And she just laughed."

"We're making it work, and we're making it work because we talk a lot, and we can be so totally open with one another," she said. "It was just sort of meant to be, in that I would be trusting enough to enter something like this on a journey again."

Hoffman and Jones don't yet have a wedding date set, but they're not worried. Jones is continuing to take care of her mother in Colorado, and Hoffman runs a successful headshot business, where he is applying the lessons he has learned about vulnerability to help his subjects' personalities shine through their photographs.

"There's something uniquely genuinely wonderful about learning to love for the first time in a very real, genuine way," he said. "I enjoy the journey with her. And right now that's a lot."