Keepin' it Local: Garden City's Barbarian Brewing brews up a variety of drinks on tap

With over 30 beers available, Barbarian Brewing always has something new for visitors to enjoy. 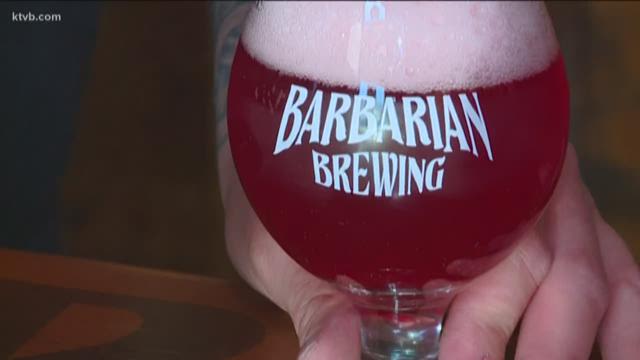 Four years after opening, Barbarian Brewing in Garden City always has something new for visitors to try.

"So in a typical month, we release eight new beers," Breanne Hovley, the co-owner of Barbarian Brewing, said. "Every couple of weeks you'll come in and half of our chalkboard is completely different beer and we range from hazy IPA's, Westcoast IPA's, our sours, kettle sours, barrel-aged."

Hovley owns the brewery with her husband, James Long, the brewmaster.

"With our diversity of beers, we have two types of sours we have kettle sours which are made over in the production area, they're quick sours, done in two weeks, and on draft, and then we have our barrel program and these age from 6 months to two years depending on the sour that he's making," she said.

In their barrel aging room, Barbarian Brewing has more than 30 local beers on tap.

"So we're in our barrel aging room where I would say there are about 30-40 different beers back here," she said. "Everything on this side of the room, so we've got stouts, whiskey barrels, red wine, white wine, we have a whole array of things aging back here"

Hovley says they're always looking for something different to bring to their Garden City location and their new taproom in downtown Boise.

"But it kinda just goes off demand, lately crazy unique beers that James wants to make and what people are asking for in our taprooms," she said. "Some of our ice cream ales and our candy series have been a huge hit based on what people want to drink. so our Reece's pieces ice cream ale is the most popular beer we've ever put out."

That ale will return in August and there are still plenty to try now, which is something that makes their brewery stand out, Hovley says.

"So with all the different breweries in town we feel Barbarian Brewing stands out primarily because of the diversity of beers we're making and because you can really only find our beers in our taproom," Hovley said.