Riggins Rodeo: 'It can get pretty wild' 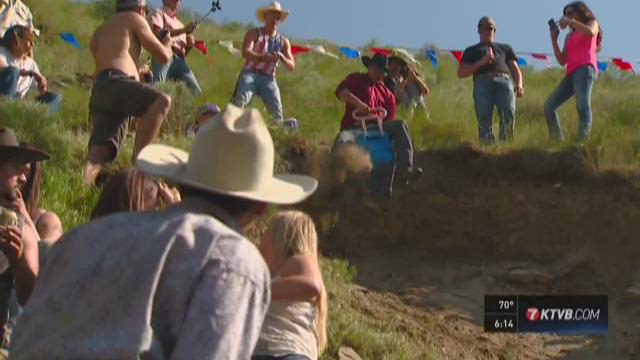 During the first weekend of May, the self-described whitewater capital of Idaho turns its attention from boats to bucking chutes.

For 68 straight years, the Riggins Rodeo has been a staple of spring in the Gem State. The town, which is normally home to about 400 people, more than triples in population each year for the first full weekend in May.

"Motels are all full, there's a lot of stuff going on," said this year's rodeo Grand Marshall, Buck Fitch.

The longevity is only part of why this place fills up.

"And of course there's cowboys, hello, and I'm single now," laughed Mandy, who's here for her annual visit.

What she's trying to say is there's a lot of local talent who are hoping to be in mid-season form in the season's first rodeo.

"Never look around or you'll miss something," said Ray Gillihan, who has seen it all over the last 20 years from his seat in the stands.

And while the stands do fill up, there's another spot that's probably just as popular. There is always a crowd that collects on the hill that hovers over the arena.

Right about the time the bulls start bucking down below, those who are feeling courageous grab a cooler and attempt to ride it down the hill.

It's a tradition that started decades ago.

"It's just crazy," said one spectator "Guys ride that cooler down, crashing through the rocks. It's crazy."

"I rode down the hill in 1996 and broke a toe," remembered another.

As to why it started, that is also easy to observe.

"They might have had a few too many. That's all I can say."

Believe it or not, they do have a method to their madness.

"The trick is, you gotta keep your feet in front of you, ok?" said a three time veteran of cooler riding. "So you don't fall on your face, 'cause then you're going to have a bad time."

The measurement of success on the hill is almost as simple as success out of the chute.

And they will do it all again next year, too. So, if you are planning on going, make you get your reservations early, because the motels and campgrounds fill up well in advance.