Very few can be considered legendary Idahoans. But one man, who moved to the Gem State during the Great Depression because he wanted to see some mountains, makes a strong case. 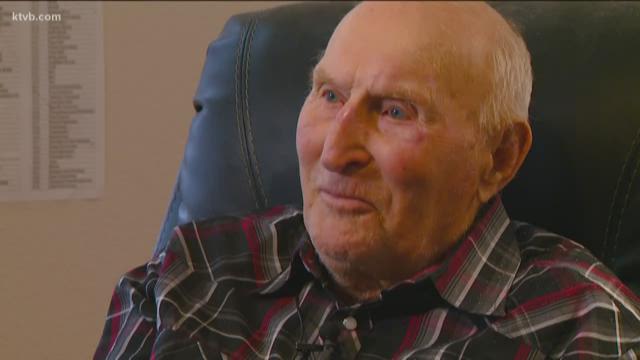 Wilbur Wiles wasn't planning on turning 102 here at the Brookdale Senior Living Center in Boise, but driving a winding road on the way to Arizona three months ago changed that.

"I come around a curve pitch dark, and I didn't see it coming around, you know?" remembers Wilbur, sitting in a chair in his room.

A truck was parked in his lane with the lights off.

"And boy, I hit it before I seen it," he says, detailing the broken bones in his chest that are recovering.

In fact, Wilbur would rather be spending his birthday tomorrow (Friday) where he has spent most of his other days - in Idaho's mountains.

"I don't know, I always wanted to go to the mountains," says Wilbur.

Well, he didn't just see them, he rarely left them.

Wilbur came to Idaho from Iowa in 1933 at the age of 17, trapping fur in the Tetons and finally settling in the middle of the Payette National Forest in 1938.

Living a life of somewhat solitude was everything Wilbur had hoped it would be.

"I don't know it's just quiet," he laughs, explaining why he loves living in the mountains. "I'm just kind of a loner, I guess."

In 1941, Wilbur entered World War II and crossed Omaha Beach three days after D-Day as a member of the U.S. Army's Signal Corp.

After a few years in Europe, Wilbur was back in Idaho's backcountry. He is one of the few to call this wilderness home, living off the land and seasonal supplies for the last 80 years, creating a life many consider legendary.

"I don't know why I should be, (I'm) just an ordinary average guy," Wilbur says.

In the 1960's, he was part of Idaho's first statewide study of cougars, tracking and tagging large mountain cats for 10 years. He even survived an attack from one that had trapped his dogs.

"There's where one of his canines went in there," Wilbur says, showing the scar that is still on the top of his hand.

Over the years Wilbur married, built a cabin in Big Creek, and even owned an opal mine.

But even after turning 100, Wilbur has made no plans to walk away from his home in the wilderness.

Tomorrow there's a party planned for his 102nd birthday.

"If there's gonna be cake and stuff I'll be there," he says.

But as soon as the snow melts Wilbur will make his way back to Big Creek.

Says Wilbur, "I don't plan to do nothing except get enough wood in."

Setting himself up for another four seasons in Idaho's mountains.