Meet the 'Birdman of Boise' 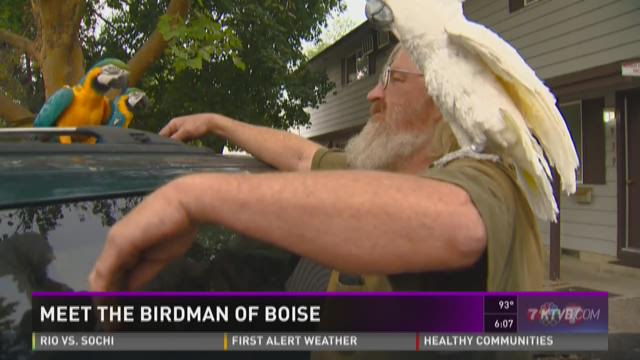 BOISE -- There's a chance you've seen Anthony McClure around town, walking with a menagerie of macaws and keeping the company of cockatoos.

But this morning means another odd job for maintenance man McClure. The job, however, may not be as odd as the man.

He's gone by the name Hawk Shadowwalker since he was a teenager. Though these days, Hawk's mostly known as something else.

"Some people call me the "Birdman of Boise," said Hawk.

That's because he's basically a walking-around aviary, unpacking parrots along with his work equipment.

Hawk says he could build a house from the ground up, having worked construction for 20 years, but nowadays he works whatever job pays him...at whatever place allows him to bring his birds.

"I do all kinds of strange things," admitted Hawk. "This is why I like working alone. I can do this kind of stuff."

With his two dogs and five birds, Hawk's always been an animal lover. "One animal isn't enough, you gotta be a walking zoo," he said, laughing. "I just understand 'em. I understand animals better than I understand people, you know?"

However, he didn't set out to be a birdman.

That was almost 20 years ago and that one was Chance, the 29-year-old umbrella cockatoo.

Then along came Buddy, the blue macaw. Followed by Max and Oscar, the military macaw.

"I've had Oscar for about six months," said Hawk. "Then I got Dori over there."

That was a month ago. All of Hawk's birds are male and all are rescues.

Hawk says his "kids" can be more than a handful sometimes. "This is like having a 5-year-old kid for the rest of your life," he said.

They can also be messy and destructive, a lot of times.

So it's kind of handy to be a handy man.

Sure, some people may call him crazy, but long ago Hawk stopped caring about all that.

"I used to be miserable all my life. And then one day I determined I just want to be happy," Hawk recalled. "I'm tired of being miserable, I'm tired of worrying about what everybody else thinks of me. I'm just going to be happy for myself. And it works out a lot better that way."

That's where his birds fit in even if he doesn't.

"My main thing is, I just want them to be happy." Today it's building fences. As for tomorrow? "Uh, tomorrow I don't know," said Hawk.

But he does know he'll be bringing his birds.

Hawk's birds all have a life expectancy of about 80 years, which means they will all likely outlive him. That is the reason they are all accounted for in his will.