Idaho Life: Pursuit of a painting

Sometimes the smallest gestures leave the most lasting impressions. For Tom Rosen, it was an artistic impression made more than 50 years ago, and half a world away, that has impacted his life since he first saw it. But he never thought he'd meet the man who made it happen. 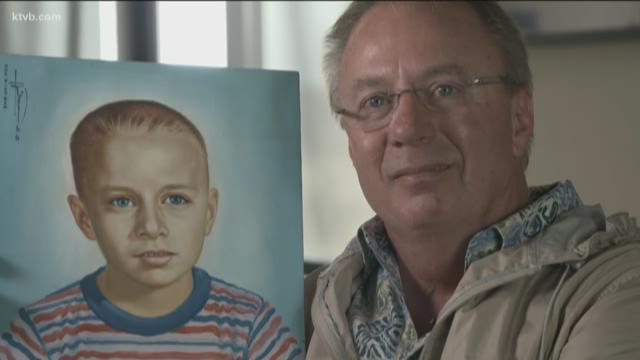 BOISE, Idaho — For Tom Rosen, Vietnam has been an infatuation.

"Really a fascination, almost an obsession," he admits.

But one that he only fed through photographs.

"Well, you know, when people ask you, 'If you could go anywhere where would you go?'" Tom explains. "People always answer Australia, Europe and all these things. I always said Vietnam. My whole life."

Then last December, Tom turned 60 and his wife gave the Boise man the gift of a lifetime, sending him and his 40-year-old son, TJ, to Vietnam.

From the flora to the food, Tom's trip seemed to deliver on all his dreams.

"The food was fantastic," he says. [The country] was so much more than what I thought it would be."

About a week into his 11-day stay, Tom and TJ landed in Hue, a city where 52 years earlier, Tom's brother served a stretch of his 13-month tour of duty during the Vietnam War.

Rick Kulhanek was one of Tom's three brothers drafted and sent overseas.

"That's me in the helmet," Rick says, pointing to a picture of him and his brother Terry together in Vietnam. "He was a Seabee, I was a Marine."

Shortly after he and Terry took that picture in 1966, Rick pulled another picture from his wallet and gave it to a street artist in Hue.

"I don't know why I did it," Rick recalls. "Well, because I thought it'd be cool to have a handmade painting."

The picture he had was of an 8 year-old Tom, and the painted replica cost Rick a dollar. A pretty good deal even in 1966. However, it was hardly a big deal at the time to Rick, considering the circumstances.

But back home in Jerome, Idaho, Tom thought the world of it.

"We were not really people of means so this was really my most prized possession for years," Tom says.

And it formed his Vietnam fixation.

"This started it," he says.

So in March, when Tom found himself in Hue - on a whim - he and TJ set out to find the artist, an effort they admittedly felt was futile.

Then, within a two-hour time frame, they found themselves at The Hope Center, a school for disabled adults, where they found Thuy, a woman who spoke English, who helped decipher the artist's signature on the painting, and then, somehow, helped them find Rin, the man who painted the portrait more than 50 years ago.

Serendipity is a severe understatement to Tom.

"In a city of 500,000 people, where no one speaks English," recalls Tom. "We talked to exactly four people before I was sitting in the same room as him."

Now 82 and retired, Rin didn't remember painting the picture in 1966. But he told tom he's sure of one thing.

"He said, 'You're the only one who's come back,'" Tom remembers. "And he painted hundreds of Marines."

And who knows how many kid brothers.

"What is really amazing is that he's had it all this time," Rick says.

A painting that took mere minutes to complete, that framed such deep feelings for decades, has now been brushed by a stroke of luck.

"Everything kind of came together," Tom says. "It was a minor miracle in my life."

Tom plans to return to Vietnam again. He has pledged to help The Hope Center in Hue, the adults with disabilities school that helped him find the artist. They are in need of a new building and he hopes to return their generosity by helping them do that.