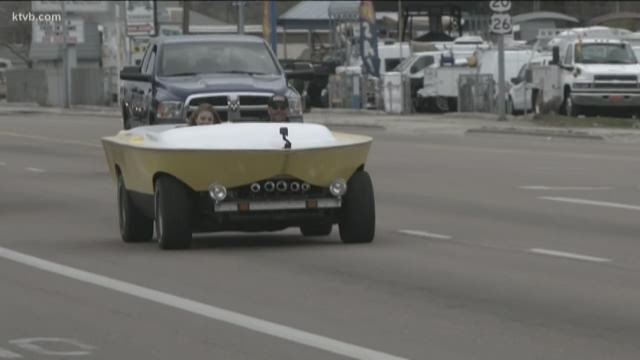 GARDEN CITY, Idaho — Making a mark in the marine business means Johnny Hearne has had to spend hours in his Garden City boat shop, sometimes dismantling someone else's motor.

The labor of this love also runs in the family.

"I've always like, loved boats and stuff," says his 14 year-old daughter, Karly, who's a bit of a mid-sized motorhead herself.

When she's not racing boats or cars Karly's helping out here starting every spring. Which is just fine with Johnny.

"For her to want to hang out with dad, you know," Johnny laughs.

A perfect pairing inspiring a project that began with a broken-down, old boat in their backyard.

"And the boat was basically rotten," Johnny says. "It was going to go to the dump."

But one man's trash is a daddy and daughter's nearly-sunken treasure.

"I sanded it, I cleaned it, I helped put nails in the boat," Karly says. "I kind of just was his sidekick."

"We decided to see what we could do with it," says Johnny. "Do something fun with it."

So on this day, nearly a year after embarking on this junk journey, Johnny and Karly are taking the vessel on its maiden voyage, of sorts.

Did we not mention this boat, is more of a car?

The bottom half of the vehicle is a mid-80s Camaro that was also once destined for the dump.

"It was damaged, but it ran good," admits Johnny.

Now, it's the power pushing a re-purposed street-legal street sloop.

"Yeah, you kinda need sunglasses," Johnny says, as he slides his shades over his eyes while sitting behind the wheel

'Cause you gotta be cool if you're gonna be seen cruisin' in this. And they are certainly seen.

"What?" asks Karly, wondering why her dad is laughing.

"She's laughing," he says, nodding to the women driving next to them.

"A lot of people laugh when they see the boat car," Karly says, laughing.

"Is there any music in here?" she asks.

Nope, just the sound of the wind in your ears, and the occasional air horn.

Karly pushes a button under the dashboard on the passenger side and a horn that sounds an awful lot like the General Lee from the Dukes of Hazard, as if you needed anything else to attract attention.

About the only downside of driving a boat car: the self-served snacks since there is no windshield.

"I'm just glad there aren't a lot of bugs out here today," Karly says, then chokes on one. "Oh, there might be."

So, maybe it's not made for water but there are oars in doors.

Because you never know when you might put the pedal to the medal through a puddle.

Johnny and Karly, giving a new meaning to "a little dinghy."

"The looks we get, the looks we're going to get," Karly laughs. "Oh, I love this thing!"