Idaho Life: In pursuit of pennies

Pennies are almost worthless, right? In fact, if you were to pick up one every five seconds for eight hours, you would still be making less than minimum wage. But for the students at Melba Elementary School they are much more valuable. 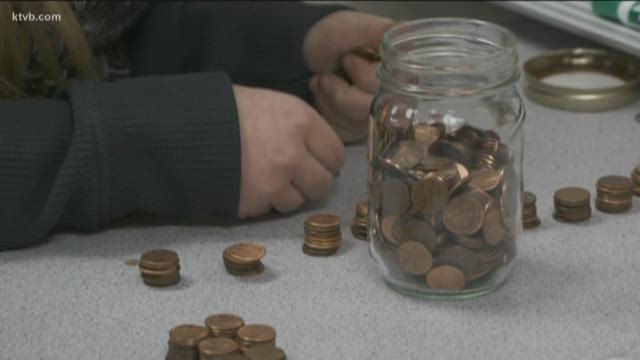 That is until students Leah and Allison take on the atypical task of counting pennies.

"Sometimes I just have to count aloud," says Leah. "To remember where I'm at."

They've devoted time to it daily since the start of the school year when Mrs. Franklin was looking for a visual version of math.

"I said, 'well, let's collect a million of something,'" she recalls.

That's when the class came up with the idea of coins and they began loading up on the lowest of loose change.

"Yeah, 'cause they're just floating around," says Elle Crimbchin. "And not many people use 'em."

Well, now they are being used to help make sense of what a million of anything actually looks like.

However, hitting the mark of a million, one Lincoln at a time, was taking too much time.

So after three months of going it alone they started going classroom to classroom asking the rest of the student body to chip in.

Credit: Bill Krumm/KTVB
Students at Melba Elementary School have been working this year to collect pennies as part of a class project.

But compiling pails of pennies isn't the project's only purpose. The students had another idea.

"Once we collect the pennies, let's donate them somewhere," says Mrs. Franklin.

"Yeah, so we can help people in Africa," Leah says.

Last summer Mrs. Franklin visited a school in Nairobi, Kenya, in the middle of the Mathare Slum. To live there is like cramming the entire population of Denver into the town of Melba, leaving a lot of people with few options.

Mrs. Franklin saw first-hand what that will take.

And hopefully stockpiling small change can make a big difference.

"We're hoping that we can change a few lives with that," says Mrs. Franklin.

The question now: can they collect enough copper to get to their goal before the middle of May?

"The school grand total is 79,801 pennies," Abby announces over the school sound system.

Not that they are feeling overwhelmed just yet.

"We're always teaching them to dream big and to believe in the impossible, so," says Mrs. Franklin. "Has it been more difficult than we thought? Yes."

"Somewhere in the valley, I'm sure, there's a million pennies out there," Mrs. Franklin encourages her kids. "So we'll find 'em."

UPDATE: Since we visited Mrs. Franklin's classroom, the students have pushed their grand total to just over 130,000 pennies.