At Silvies Valley Ranch north of Burns, the local livestock are hoping to horn in on the game of golf. 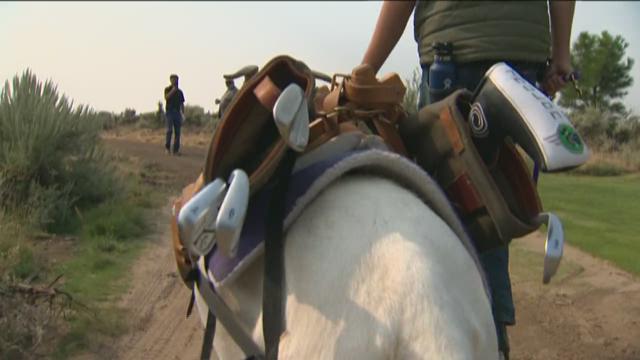 SENECA, Ore. — Near the southern edge of the Blue Mountains sits Silvies Valley Ranch, a working ranch since the 1880s. Now, nearly a century and a half later, it's still an active one, home to herds of livestock and numerous native species.

The ranch is also a retreat. So, set aside among its 140,000 acres are 52 holes of golf, seven of which you get around with the guidance of goats. Yes, goats.

The newest addition, a course called the McVeigh Gauntlet, is a steep, up-and-down walking course - appropriately, and affectionately, referred to as a goat trail.

That's why every morning at the caddy shack handler Michael Snyder, who's never spent much time with goats, spends several minutes saddling Mike le Chevon and Bruce le Goat, 4-year-olds that, before this gig, were out grazing on high desert herbage as part of Silvies' herd of 3,000 American Range Goats.

"Now, those goats have a one-career path and that was to become a meat goat," says Silvies' vice president, Colby Marshall.

Colby says the idea to get the goats culled from the culinary component of the resort came from a company meeting that likely involved a bit more than just brainstorming.

"I think more of it involved a lot of sudsy beverages," Colby admits.

Which is kind of what a day on the McVeigh involves.

On this seven-hole course with a lot of carry it helps to have a hand in carrying your clubs and keeping criticisms to a minimum.

He continues, "Tell you what, having a goat caddy gives you someone to talk to that doesn't talk back."

"They're very social animals, they love being around people," he says.

And they're OK with literally working for peanuts. But at that price, they also dictate the pace of play.

"They really do set the pace, yes indeed," admits Colby, as Bruce le Goat lays down in the middle of the path.

Hiccups like that aside, it's not a bad way to get around a golf course.

"They take the pressure off," says Vince, who traveled from Portland to play with goats. "You get to have some fun and hit some balls, and walk with goats."

A goat of a gimmick, for sure, but one they hope can find a hoof-hold at Silvies. Sorry for that one.

The motto at Silvies Valley Ranch is fun and it's not just evidenced by the goats. The McVeigh Gauntlet has an "extra" hole, a par-2 with a stocked cooler. They call it the "beer hole." Visit Silvies Valley Ranch online if you would like to book a tee-time on the only golf course in the world with four goat caddies.