"Time is an illusion." Not necessarily for someone who repairs clocks. But when you spend days syncing up seconds, the years can easily sneak by. 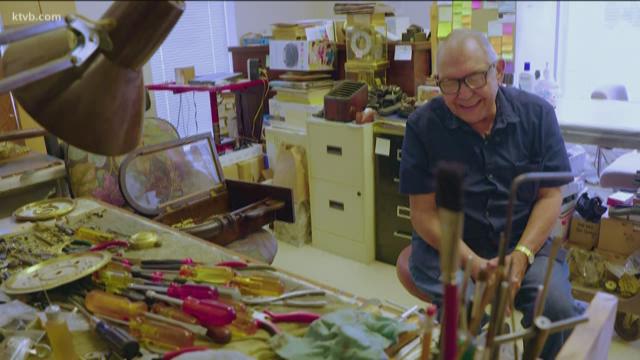 BOISE, Idaho — Like the flash of a passing car, 40 years can go by, well, just like that.

And if anyone can measure the prompt passage of time it's the lone horologist, like Larry, owner and operator of Arden's Clock Shop in Boise.

It was his dad, Arden, who did the clock work while Larry made his way as a mechanic in the military, working on Huey helicopters out at Gowen Field during the Vietnam War.

Then, in 1979, Larry's dad died. And the business almost went with him until Larry's mom told him to take over.

So, he set out to prove his mom wrong and wound up fixing his first clock in about 15 minutes.

Now 79, Larry is still sticking with smoking and his onomatopoeic nickname.

"They call me Tick-Tock," Larry laughs.

Credit: Xanti Alcelay/KTVB
Larry Harris works on a clock at his shop on the Boise Bench.

And he's still serious as a surgeon when it comes to correcting and cleaning his clocks. Even the specific placement of spent cigarettes and ash in his ashtray shows he works in exacting detail with almost everything.

"Except my bench and my desk," he continues, laughing. "They're a mess, a total mess."

But at least they've never been empty. Larry says he's probably seen a thousand clocks a year in his store, some from as far back as the 1700s. Not bad for someone who's spent four decades doing something he didn't really want to do in the first place.

That kind of reflection will continue for Larry. The workshop, however, won't. When what's left of his three-year lease lapses, Larry will take some time for himself, with no one to take over for him.

"Nobody, nobody," he admits. "When I'm gone, this all goes in the dumpster."

It will be the end of an era, and an acceptance of the age, where clocks are already an antiquated anomaly and the tick of time waits for no one. Its passage only palpable to those who pay attention to it.

These days Larry works just four hours a day at his shop on the Boise bench and he works alone. The last time he had help was back in 2012. Larry says neither of his four daughters have any interest in taking over the family business. But he's OK with that. After all, he didn't want to do it either.