Craft beers and beards. You don't have to be a hipster to know both of those have been booming over the last several years. Meet a Treasure Valley man who can combine the two of 'em with the best of 'em. 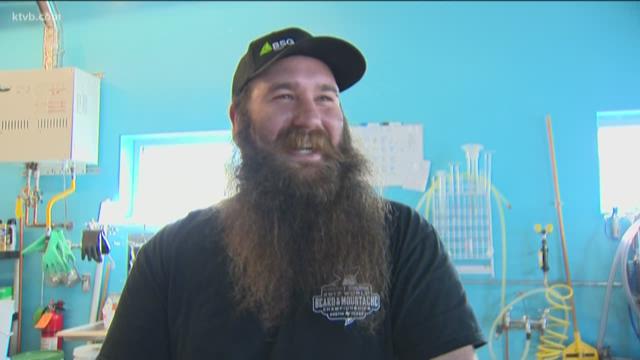 BOISE - Twice a week Eric Brooks spends his mornings measuring, mixing, and monitoring the process of making beer. Clairvoyant Brewing Company in Boise's West End is one of the Treasure Valley's newest taprooms, joining a statewide group that goes beyond 60 breweries.

"It doesn't matter where you're at," says Eric. "Craft beer it's booming."

Clairvoyant crafts seven to 10 styles of small-batch brew, ranging from the American Pale Ale Eric is making this day to its popular IPA.

But what is also earning this alehouse some attention is attached to Eric's face: a bushy beard that travels from his chin to his chest.

"People ask more questions about the beard than they ask about me," laughs Eric. "But it's definitely grown on me, it's taken on a life of its own pretty much."

Eric says facial hair has always been part of his identity, going back as far as middle school.

"I was the kid with the mustache," he says.

Then seven years ago he learned about beard contests, and his hirsute hobby grew from there.

"You know, (it's) just kind of flaunting what you have, you know?" explains Eric, describing the beard beauty pageants. "It's fun."

Credit: Eric Brooks
Eric Brooks has a highly customizable beard, depending on the occasion.

It's like a traveling carnival, a fashion show for the follicly fortuitous. Eric says he's competed in nearly 40 across the county and has placed in almost half of them.

"And most of those have been first place," he admits.

Eric's even ended up on television for what he created for his favorite hockey team, the Washington Capitals.

"Every time I go to a game everybody's head just turns and they're like, 'What did I just look at?'" he says.

Credit: Eric Brooks
Eric - and his beard - are big fans of the Washington Capitals hockey team.

It's a reaction the 29-year-old has gotten used to since Eric's fleecy fortune has become as much a part of Clairvoyant Brewery as the beer. And a facial feature his 2-year-old daughter has only ever known.

"She's so used to it now that, you know, whenever she sees another bearded person she's like, 'Daddy!'" Eric says.

It's also kind of coerced his colleagues to try to keep up. Some have done a decent job. Some, like Sean Pletcher, are still working on it.

"I'm probably like five years out on it, though," says Sean, who is learning the brewing process, and bearding, from Eric. "It's gonna be a little ways out for me, this is about as good as it gets for me."

With Eric's facial hair fully engulfing his life the rest of him has had to adapt. For example, in order to eat or drink he's developed a method that means moving the mustache out of the way.

Pretty simple, a perfect summation for a piliferous suds maker.

Eric says other than his daughter, there is one person for whom he would shave his beard: his fiance. Like his daughter, she's never known him without one and she told him she wants to see what he looks like underneath it all.

Before that happens, though, you can see Eric compete in the Boise Beardsmen's Beard Bazaar on June 2.