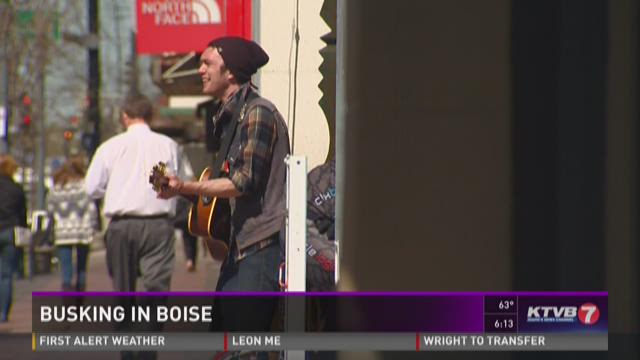 BOISE -- Busking. It's a term that has gained some serious traction in the American lexicon over the last 30 years.

It means to play music on the street for money. You can find buskers playing in populated places like the downtown market in Boise on Saturdays.

But when it's springtime in Boise, and the sun is out, it usually means the people are out too. In the middle of the downtown deliveries, the lines of little ones, and the constant comings and goings you'll find Ashley Daniel Brown, almost as stationary as the Boise totems he stands beside.

Ash, as his friends call him, is busy busking.

"Well, I just lost my job and that's why I'm out here," said Brown.

Picking an Epiphone guitar that was rebuilt and is older than his 24 years, Ash tries to lure some legal tender from the lunchtime traffic.

"Hey, thank you so much," Brown said to a passerby. "Early bird gets the worm, I guess."

However, Brown says he doesn't do this just for the money.

"It's as much about my passion as it is about just trying to survive in the rat race of our society," explained Brown.

Although, enough to pay for a pack of guitar strings is always a goal.

Brown moved from eastern Washington about five years ago after hearing about Boise's vibrant music scene and after having already done Seattle.

"There's buskers everywhere and you have to have like a permit," laughed Brown.

So he has kind of cornered the daytime downtown Boise busking market.

For the last few weeks he's been here everyday, about six hours a day, and his hands, which he shakes as they get tired, are still getting used to the schedule.

"'Cause I'm not a mainstream kind of guy," admits Brown.

But now and then he will play some Pink Floyd. And that, eventually leads to their song, 'Mother.'

"Oh, mother do you think they'll like this song?" sings Brown.

Everyday Brown said he thinks about his own mother who died when he was 11.

"Like a woman will walk up to me, like she did yesterday," remembered Brown. "And she'll like, give me a smile. And like, tell me I should call my mom and it's kind of like, bittersweet because there's that realization that I can't, but it's also like a reminder that she is always with me."

And, at least for now, Ash will be here at 8th and Idaho streets among the business suits and school kids. Playing songs instead of punching a time clock.