Jared Buck, once known for showing off his one-and-only dance moves as a sign spinner, now volunteers for the Peace Corps 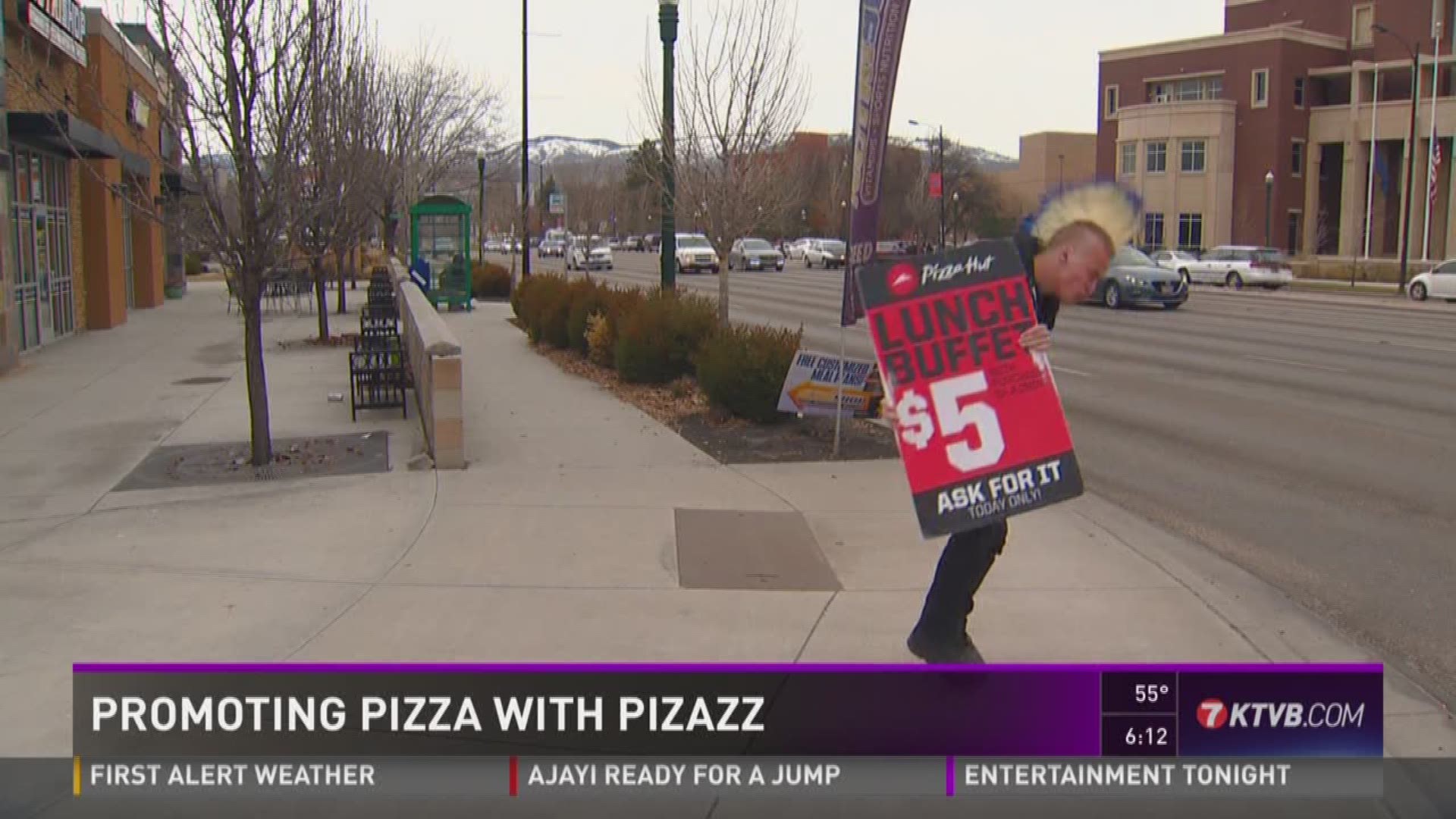 BOISE -- You can see them on almost every busy sidewalk in the City of Trees...sign shakers whose job is to bring you into their business.

And some are able to draw attention for reasons other than the deals they are advertising.

For example, the Pizza Hut on Ann Morrison Park Drive has an all-you-can-eat lunch buffet where they serve pizza, pasta, breadsticks, cinnamon sticks, and a salad bar.

You can see they have a buffet by the words on the window, and the sign in one of their employee's hands.

Jared Buck has been convulsing this cardboard on the corner for about seven months. It's a job he asked for specifically.

"And I put him out there, and he rocks it everyday," said Buck's boss, Scott Hamilton. "Literally, rockin' it."

While Buck - complete with a cutoff denim jacket and a 10-inch mohawk with blue tips - may look like an inexplicable moshpit of marketing while he is working you should hear what he's hearing.

It's actually harder than hard rock.

You know, angry fun stuff - from the likes of bands like Bear Tooth and Bullet For My Valentine.

"I can feel the energy in it which is, I mean, it kind of translates into what I'm doing here," said Buck as he throws his head back and forth.

Buck puts the earbuds in and rocks out, or whatever you want to call it. It works for the 21-year-old and his boss.

"People mention him all the time," said Hamilton, manager of the Pizza Hut. "He's like a little corner celebrity out there."

He gets noticed regularly by Boise State University students who cross the intersection of 9th Street and Ann Morrison Park Drive.

"Because he's out of the ordinary. He's got crazy hair, he's dancing around," said one student.

Buck even got his own cartoon on the back of the Boise State paper. "Yeah, I got a comic man!"

He's out there five days a week, showing off his one-and-only dance move for about 90 minutes a day - because that's about all he and his hair can handle.

Then it's back across the street with the rest of the BSU students, where he is studying international business...something that might be a surprise to some.

"You know, they see me with the mohawk and lip ring and they're like, 'Business, huh?'" said Buck.

But what Buck's learned out here on the corner is just as valuable as what he's picked up in the classroom. "You know, if you gotta job to do you gotta do it well," he said. "Might as well have fun doing it."

If you missed this headbanging billboard today, don't worry, he'll be back tomorrow. Just not without his music.
Said Buck, "I would feel ridiculous doing this without music. I don't even know what it looks like when I do this. I can't imagine. It's gotta be ridiculous, right?"

Buck said he considers his job low-level networking. He gets a lot of looks out there on the corner and they are usually followed by smiles, which he says is the best part of his job.

By the way, Buck chose international business because he said he eventually wants a job where he moves around a lot.

Jared graduated from Boise State in the spring of 2019 with a degree in international business.

Since then, he has moved around a lot: from Germany to Ukraine, where he is currently teaching English as a member of the Peace Corps.

"I thought that's a pretty punk rock thing to do, keep my credibility I suppose," Buck said.

But he says his pizza past hasn't escaped him.

"Even, like, I lived in Germany for a year as an exchange student and they found out about it, and they were always asking about it I had some students even just three weeks ago that googled me and it came up so it follows me around," Buck said.

Jared said he ditched it, and his lip ring, before going abroad.

"I ditched the lip ring but I still have the nose ring."