Not just a summer destination, Idaho's Craters of the Moon offers 'surreal' winter fun too

Craters of the Moon is one of the few places in the country where you can snowshoe or cross-country ski on top of a volcano. 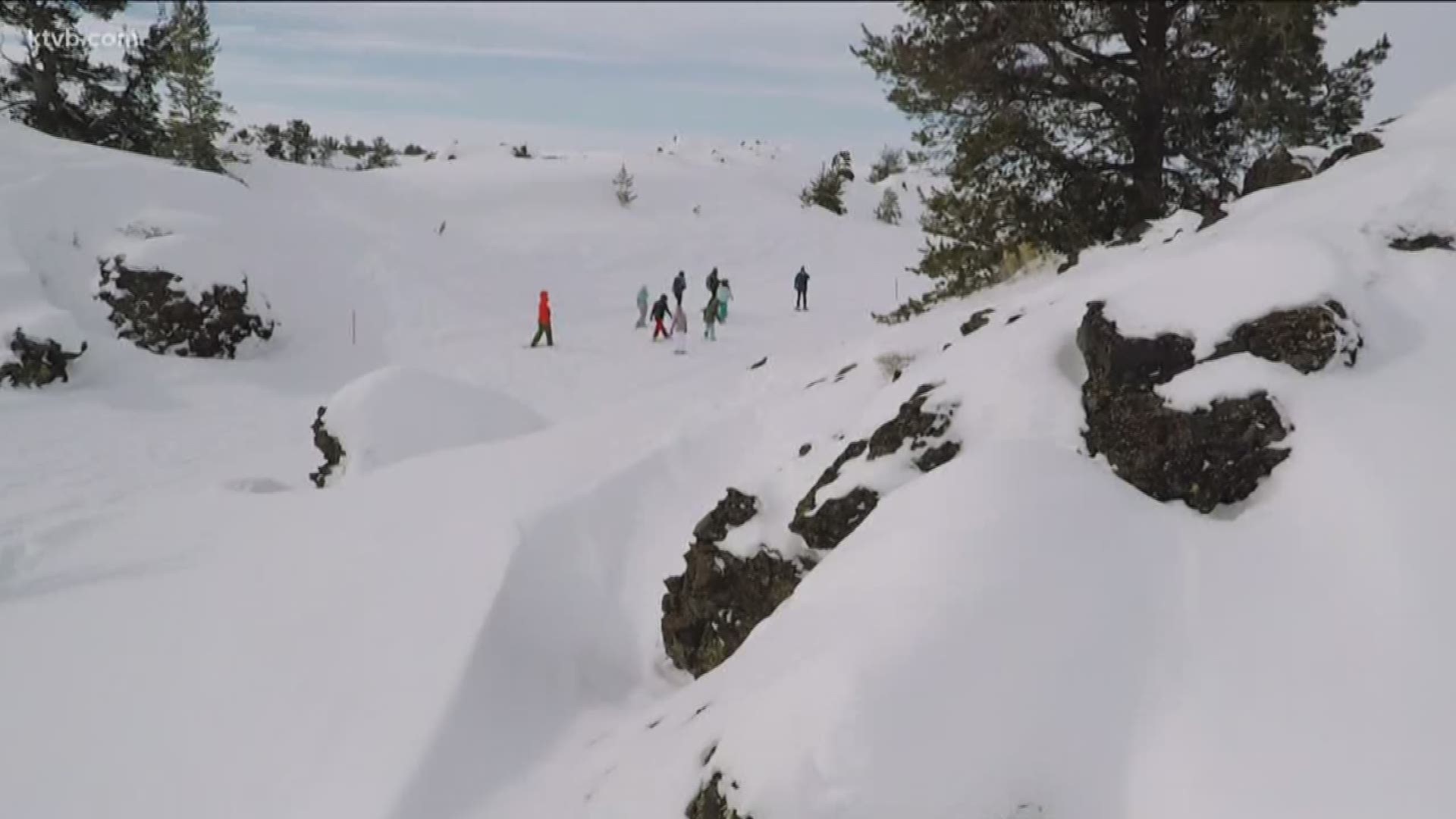 ARCO, Idaho — Snowshoeing is a popular alternative to hiking during the winter months in Idaho.

There are lots of places to snowshoe throughout the Gem State, but perhaps the most unique place is Craters of the Moon National Monument and Preserve.

One of three national monuments in Idaho, Craters of the Moon was established in 1924 by President Calvin Coolidge, who described its volcanic formations as "weird and unusual."

"People aren't really used to looking across vast landscapes and that's something you can do here at Craters of the Moon," said Greg Reed, lead interpretative park ranger.

And when summer gives way to winter, the park's rugged beauty transforms - a dramatic contrast with dark lava rock protruding the white snow.

Snowshoeing at Craters of the Moon

1 / 11
Tyson Miller/KTVB
Greg Reed, the lead interpretive park ranger at Craters of the Moon National Monument and Preserve leads a snowshoe tour for a 5th-grade class on Tuesday, Feb. 19, 2019.

Craters of the Moon is one of the few places in the country where you can snowshoe on top of a volcano.

"We are actually snowshoeing right on top of a volcanic system," Reed explained as he led a group of 5th graders from Pioneer Montessori School in Ketchum on an easy one-mile loop trail.

ALSO: ‘Like a dirt bike on the snow': Born in Idaho, snowbiking is becoming the hottest winter powersport

MORE EXPLORING IDAHO: Inside an ice fishing expedition at one of the best Idaho lakes to try your luck

The park offers free guided tours, or you can set out on your own. Just follow the orange snow poles to find your way.

It's easy enough for beginners, and snowshoes are available for free at the visitors center. You're just asked to leave a donation, which goes toward the park's educational programs.

"It's one of the best places to come and tour skiing," said Mike Blair, a cross-country skier from Pocatello. "It's just surreal with the black rock, the green trees and the snow."

Credit: Bill Krumm/KTVB
Black lava rocks jut out of the snow at Craters of the Moon National Monument and Preserve.

"Everything that we can see is evidence of volcanic activity here at Craters of the Moon," Reed said. "We've had about seven major lava flows here since last Ice Age, about 15,000 years. The last one was 2,000 years ago."

The lava fields at Craters of the Moon cover an area more than seven times the size of Boise. But the lava didn't come from a big, explosive eruption from a dome or cone, like Mount St. Helens.

"Craters of the Moon is a different volcano," Reed said.

Here, magma oozed from deep cracks in the earth and flowed across the landscape, its path visible thousands of years later - even under all that snow.

Craters of the Moon is an outdoor adventure with a lesson in geology that all ages can enjoy.

"You can really get a feeling that you're out there by yourself," Reed said. "you can hear the sounds of silence and of the wind blowing through the trees."