‘Like a dirt bike on the snow': Born in Idaho, snowbiking is becoming the hottest winter powersport

Two decades after Vernal Forbes built the first prototype in his Boise garage, snowbikes are now featured in worldwide in events like the Winter X Games. 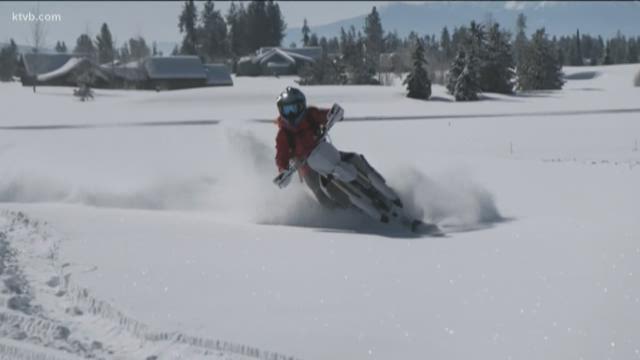 MCCALL, Idaho — Winter sports enthusiasts are always coming up with innovative ways to have fun in the snow. And that's especially true when it comes to motorized vehicles.

For decades, snowmobiles have been the standard for winter power sports. But for all of their benefits, snowmobiles tend to be heavy and are often difficult to maneuver through steep or wooded terrain.

That's where the snowbike comes in.

If you've never heard of a snowbike before, it's basically a dirt bike frame with a snowmobile-like tread on the back and a ski on the front.

Snowbikes provide the agility of a motorcycle and the ability of a snowmobile to stay on top of the powder.

Credit: Bill Krumm/KTVB
Sarah Whipple rides her snowbike near her home outside of McCall, Idaho.

They are gaining in popularity and exposure, having recently been introduced to a wider audience thanks to popular events like the Winter X Games.

And if anyone knows how to ride the converted motorcycle, it's Sarah Whipple.

"I snowbike a lot," she said. "Going into the backcountry, we do a lot of tree riding, that's where they're the most fun."

The McCall native is an ambassador of the powersport for two of the leading snowbike companies, Polaris and Timbersleds.

"It's just fun," Whipple said. "I mean, you have fun on a roller coaster, right? Except this is something you have total control of. You tell it where you're going and how fast and up what or down what."

Credit: Bill Krumm/KTVB
Snowbike enthusiast Sarah Whipple of McCall sits on her snowbike after taking a ride through some fresh powder.

The concept is simple: Riders use a standard dirt bike frame, but replace the wheels with a snowbike kit - a ski on the front, and a track on the back.

But don't confuse the snowbike for a snowmobile - the ride is completely different.

That versatility was exactly what Boise resident Vernal Forbes was longing for back in 1993 when he drafted the first snowbike design.

"I was really kind of frustrated with the snowmobiles, how difficult they were to turn and maneuver through the trees," Forbes said. "As a dirt biker I thought, 'Why does it have to be this way? Why can't we have the agility and the ability that you have on a dirt bike except on the snow?' So being an engineer the wheels started turning." 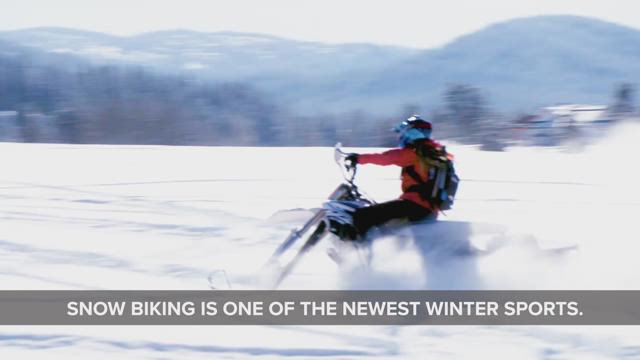 He eventually fabricated, by hand in his Boise garage, the first prototype of the modern snowbike kit.

Forbes showed us old video of the first time he took it out for a ride. His maiden voyage took place in 1998 just over Mores Creek Summit, near Idaho City.

"I remember that day so well," he laughed. "I was somewhat nervous."

But the first snowbike prototype worked just like it was supposed to: That ski-like feel of slaloming, back and forth, maneuvering through the trees and downhill.

"Right there I was thinking, 'hey this turns really nicely,'" Forbes said. "It really is more like skiing with a motor than snowmobiling."

MORE: 'Let's hope this is the future': Meet the Boise man who invented the modern snowbike kit

25 years later, snowbiking is now the fastest-growing powersport in the country, attracting top athletes from around the world.

A video produced by Redbull shows just how extreme the riding can be. It was shot in the McCall area, regarded by many as the birthplace of snowbiking.

"McCall has an incredible variety of terrain here," Whipple said. "You can ride anything from steep mountains and climb up steep shoots or you can go out into the trees and find any variety of difficulty. And then you have these meadows everywhere, you have pretty much any kind of riding you'd want here."

The real addiction of snowbiking comes from its seemingly endless possibilities - From riding the backcountry Whipple loves so much, to fast, motocross-style riding competitions that are now being introduced to a wider audience.

A snow bikecross event debuted at the Winter X Games in 2017, and was so popular that event organizers added a freestyle event last year.

"Those guys are so talented," Whipple said of the professional competitors. "What they do on these machines is unreal."

Who knows what the next 25 years will bring. As competitions grow, and other companies evolve the technology Forbes first developed.

But snowbiking will always have its roots in Idaho.

"The things that I imagined are finally coming to be and they're here to stay," Forbes said.