Bob and Robin Shindelar of Meridian have a number of "secret spots" where they swear the perch are quick to bite. 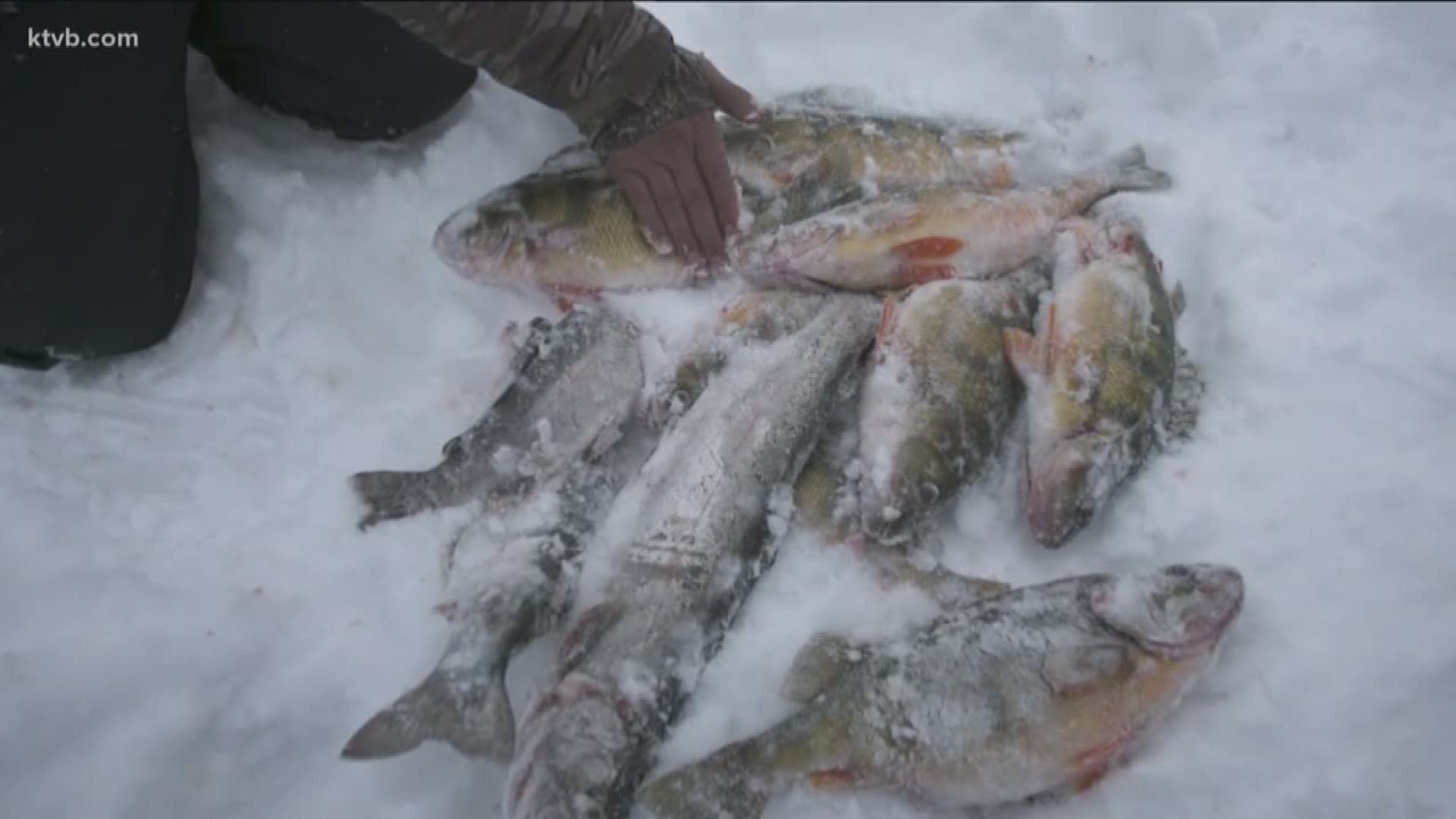 CASCADE, Idaho — For those willing to brave the cold, winter weather and freezing temperatures don't mean you have to wait until spring to cast a line.

Ice fishing has grown in popularity at Idaho's lakes and reservoirs.

On a recent morning at Valley County's Lake Cascade —  an under two-hour drive from Boise —  ice fisherman were huddled against the snow and blustery conditions in a line of huts.

Although ice conditions in a number of regions around the state allow for this type of fishing, Lake Cascade is among the best, with a reputation for producing large perch and trout.

Safety is an important consideration when planning an ice fishing trip, as venturing out on a too-thin sheet can quickly turn dangerous.

In general, ice needs to be three to four inches thick to support a single person, and thicker for groups, according to the Idaho Department of Fish and Game. Driving out on an ATV or snowmobile generally requires ten inches or more in ice thickness.

Fishermen are encouraged to drill a test hole to check the thickness of the ice before venturing out too far.

RELATED: ‘Like a dirt bike on the snow': Born in Idaho, snowbiking is becoming the hottest winter powersport

Bob and Robin Shindelar of Meridian have a number of "secret spots" where they swear the perch are quick to bite. One such spot requires a four-mile snowmobile ride out onto frozen Lake Cascade before they start setting up.

Like other types of fishing, ice fishing can be as simple or as gear-intensive as you make it. Technically, all you need is an ice auger to drill holes, a slotted label to keep the holes free of ice and at least one fishing rod, although most people opt for a short jigging rod. 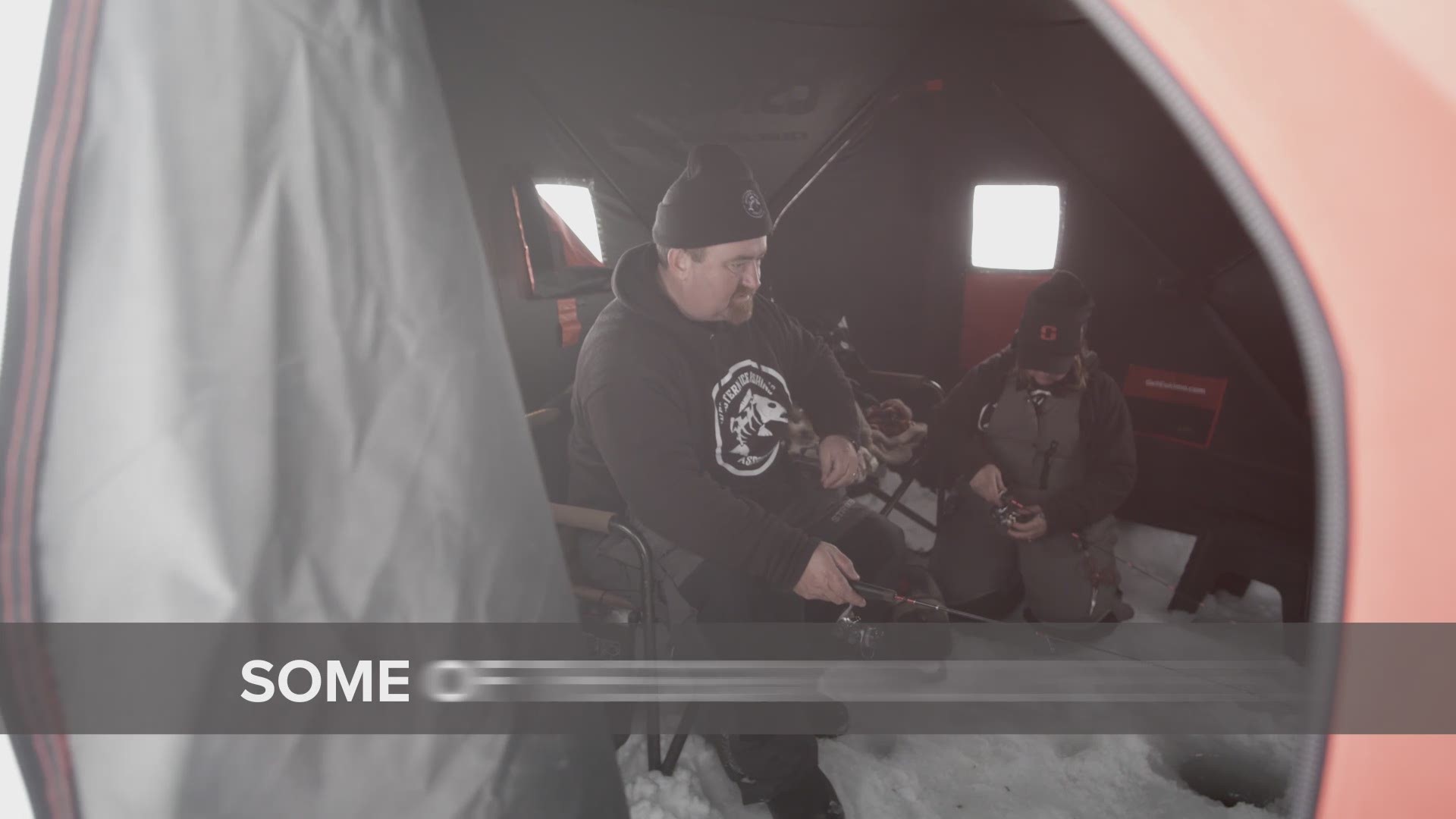 Idaho rules allow fishing with up to five rods, which can increase the chances of snagging a hungry perch or trout.

The Shindelars opt for a cozier and more high-tech set-up, with a sonar fish-finder, motorized auger, and an ice-fishing hut to block out the wind and cold. The couple also brings along Jack, their tiny Yorkshire terrier, who rides out onto the ice zipped up in Robin's snowsuit.

There's a lot to do before you can drop that first line into the water, from setting up the hut, to drilling the hole, to scooping it out to keep it clear of ice, to getting all the other gear - like Bob Shindelar's underwater camera - up and running.

After that, it's a waiting game.

"You're kind of just feeling, waiting and feeling and hoping, Robin Shindelar said with a laugh.

Everyone does it a little differently when it comes to "jigging," a technique of gently jerking the tip of the pole up and down to make the lure flutter attractively in the cold water below the ice.

"Everybody kind of develops their own style and how they like to jig and what works for them in catching fish," Bob Shindelar said.

RELATED: From 'jigging' to 'hole-hopping,' here are the ice fishing terms you need to know

Ice fishermen also frequently elect to "hole-hop" or abandon their drilled hole for a new one in hopes of better luck in a different spot.

"Generally you see fish fairly quick on Lake Cascade," Bob said. "If you go more than 15 minutes you need to move."

Despite hole-hopping three times, it looked like the Shindelars were going to come up empty on the recent expedition with KTVB.

Then, a tug on the line.

The fish was about 13 inches long - not quite the 16- or 7-inch "jumbos" the Shindelars typically catch in Lake Cascade.

"That's a beautiful perch right here," Robin said. "It's not small - it's not the large that I get really crazy about - but this is a nice fish."

Although Idaho rules allow fishermen to keep up to six trout and an unlimited number of perch, the Shindelars ultimately decided to let their catch slip back into the icy water.

For more information about getting into the sport of ice fishing, check out the public group on Facebook, Western Ice Fishing Association.

For more information about ice fishing in general, check out Idaho Fish and Game's guide on ice fishing.