Guide to Sept. 11 memorials and events in the Treasure Valley

There are numerous remembrances planned around the valley on Saturday to honor the victims killed in the Sept. 11, 2001 attacks. 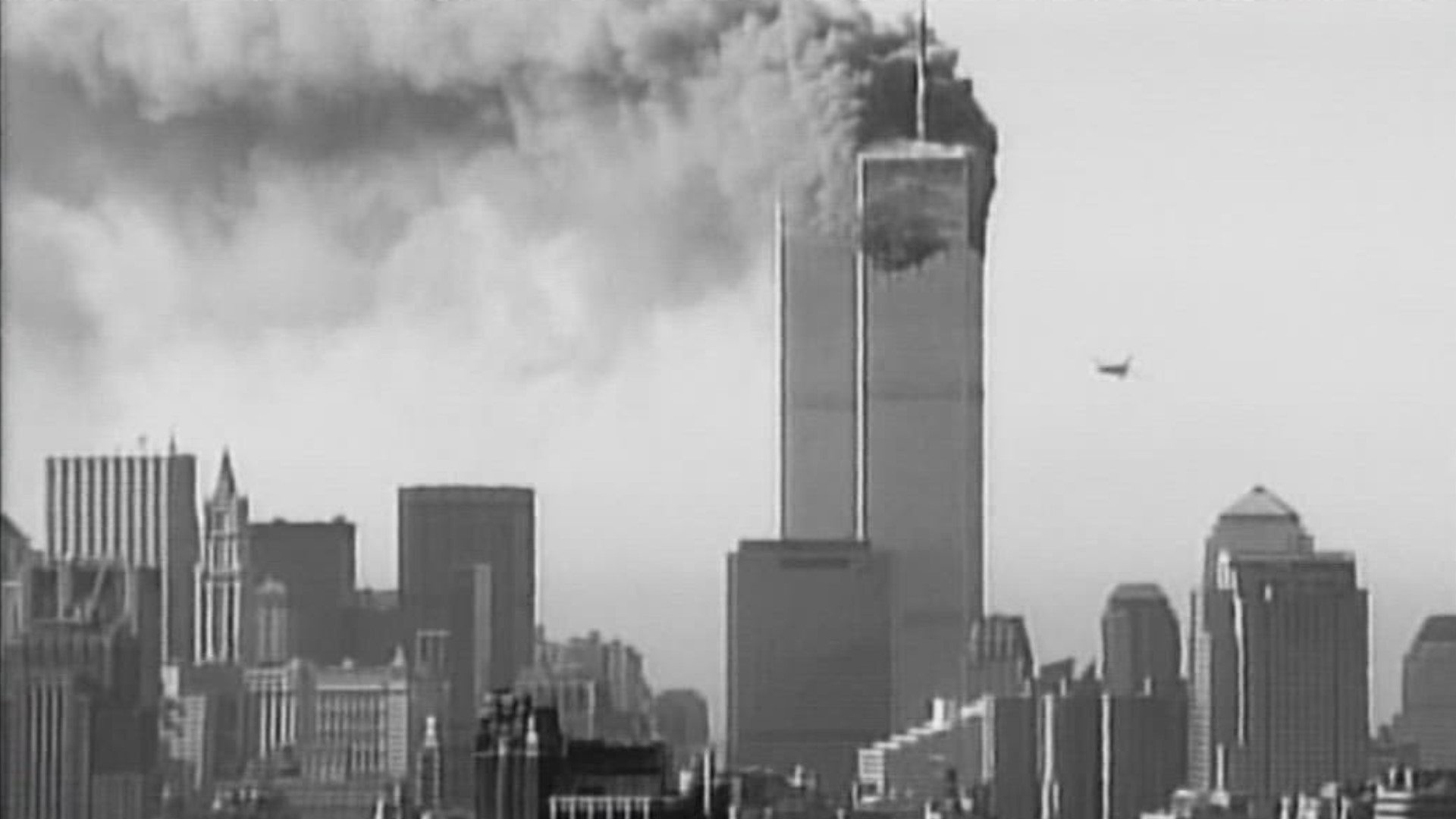 BOISE, Idaho — Saturday, Sept. 11 marks the 20th anniversary of the terrorist attacks on the United States. Nearly 3,000 people lost their lives that day after four commercial airplanes were hijacked and crashed.

The first plane, an American Airlines flight, hit the North Tower of the World Trade Center in Lower Manhattan at 8:46 a.m.  A second airplane, a United Airlines flight, struck the South Tower 17 minutes later. Both towers, each 110 stories, collapsed within 1 hour and 42 minutes.

Although it's been 20 years since that tragic day, the healing goes on for many across the nation and here in Idaho. There are numerous memorials planned for Saturday in the Treasure Valley to mark the anniversary and honor the victims. The Nampa Public Library and Warhawk Museum are also featuring 9/11 exhibits this month. Here's a list of some of the memorials and events planned in southwest Idaho.

If you live in Boise and want to attend a 9/11 ceremony Saturday, you'll need to get up early. Members of the Boise Fire Department, Boise Police Department, Mayor Lauren McLean and Boise City Council will join for a solemn ceremony to remember the men, women, and children who were killed that day.

It starts at 6:30 a.m. Saturday at the Idaho Fallen Firefighters Memorial Park, located at 1791 Shoreline Drive in Boise.

As part of the ceremony, there will be a moment of silence at 6:46 a.m. when the first tower was attacked local time. Honor Guard members will also lay a wreath on the Idaho Fallen Firefighters Memorial which members of the public may visit any time throughout the day.

The Idaho Fallen Fighter Memorial is home to a 10-foot beam from the World Trade Center. In 2011, the Idaho Fallen Firefighter Foundation and Boise Fire Department spearheaded the acquisition of the beam and made it the centerpiece of a memorial to honor emergency responders lost on 9/11.

The ceremony is scheduled to last about 30 minutes.

The 1st Annual 9/11 Flag of Honor Across America Memorials will be held Saturday, Sept. 11 at Indian Creek Plaza in Caldwell. The event will start promptly at 8:03 a.m.

Elevate Academy Youth Court has been selected as one of 25 grant recipients and 60 communities in America to lead a new national 9/11 day remembrance project called the "9/11 Flag of Honor Across America Memorials" on Saturday, September 11th, 2021.

This will be the largest national coordinated 9/11 Day project in America in remembrance of the 20th Anniversary of that tragic day on September 11th, 2021, and will involve both adults, and youth who were not yet born when the towers fell.

The 9/11 Never Forget ceremony and golf tournament will be held Saturday morning at Eagle Hills Golf Course, located at 605 N. Edgewood Lane in Eagle. The ceremony starts at 9 a.m. by the clubhouse.

A flag will be set and flying on the Eagle Ladder Truck with the Boise Firefighter Pipes and Drums and Honor Guard presenting the colors with a ceremony to follow by the tournament board members.

On Tee-Box 1, Disaster Kleenup will be showcasing the "hands of Unity" Banners. There are twelve 9'x7' canvases designed by Mary Cahoon, Disaster Kleenup and hand-painted by artist Suz Hume. Each canvas has been handprinted by each player at past tournaments.

The new Banner is entitled "United Not Divided" and will be handprinted by each golfer on the course that day. Together they will place red handprints covering up the words of riots, violence, hate speech, religious fights, racial slurs. The purpose of this is to show unity.

This tournament started in 2008 as a memorial for those who gave their lives in the line of duty on September 11th, 2001. It also serves to raise funds to assist injured police officers and firefighters. Allof the proceeds go to the Fraternal Order of Police and the Professional Firefighters of Idaho.

To commemorate the 20th anniversary of 9/11, Idaho veterans' organization Mission43 will host the 6th annual Miles of Remembrance event from 3 p.m - 7 p.m., Saturday, September 11 at the Eagle Sports Complex in Eagle.

An expected turnout of nearly 1,000 people will run, walk or ruck a challenging 5K course to honor the spirit of service and sacrifice and create opportunities to discuss complicated subjects like 9/11, terrorism, and war. Past attendees include friends and family members of Idahoans whose lives were lost during the 9/11 attacks.

Inspired by the 9/11 Memorial Foundation, Mission43 developed adult and youth audio guides recapping the events of 9/11. While the adult guide provides a moment-by-moment recap through firsthand accounts, the youth guide, written and narrated by 11-year-old Idahoan Reagan Madden, gives children a relatable voice to help them understand what the past means for them and their future.

In addition to audio guides, Nelson and members of Mission43 host education sessions for local schools to raise awareness and answer questions about 9/11 and the Global War on Terror.

Veterans, actively serving military members, first responders, community members and their friends and families are invited to join Mission43 for the 9/11 Miles of Remembrance event. To register, visit their website.

The City of Meridian will hold its 9/11 Memorial ceremony on Saturday, Sept. 11 at Meridian Fire Station One, located at 540 E. Franklin Road in Meridian.

This ceremony pays tribute to victims of 9/11 and begins at 7:45 a.m. Meridian Fire Chief Kris Blume and members of the Meridian Fire Department are hosting this event. The public is invited to attend.

The ceremony will include a statement from Chief Blume, flags lowered to half-staff, and the ringing of the Meridian Fire Station bell in honor of those who died during the attacks 20 years ago.

"As our country came together on that day twenty years ago, we will come together again to continue and uphold our promise," said Blume, "that we will never forget."

Following the memorial ceremony, the Meridian Fire Department will hold an open house until 10:30 a.m. Families are invited to visit with Meridian firefighters, see fire engines, and tour a 9/11 memorial.

Nampa Mayor Debbie Kling says the community is invited to a Patriot Day event on Sept. 11. The remembrance event will occur at Fire Station No. 1, located at the corner of 1st Street South and 10th Avenue South in Nampa.

Nampa Fire Captain Frank Beauvais will emcee the event and Nampa firefighter and paramedic Joel Baker will be the bell ringer. The invocation and closing prayer will be given by Nampa Police Department Chaplain Andy Satta.

Taps will be played during the raising of the flag by Larré Robertson, a member of Bugles Across America. This year the flag will be presented by Nampa Fire and Police Honor Guards, followed by Amazing Grace on the bagpipes. The ceremony includes the Ringing of the Last Alarm, a tradition in fire departments when there is a line of duty death.

The event will also be live-streamed through the Nampa Police Department's Facebook page. The ceremony is expected to last about 15 minutes. Those attending in person are encouraged to arrive a few minutes early and practice physical distancing. The ceremony will begin promptly at 8 a.m.

The American Legion and Courageous Survival are co-sponsoring this memorial event. It's being held outside at Elevate Mind Body Studios, located at 314 Caldwell Boulevard in Nampa.

The live tribute will feature the American Legion Color Guard, Chaplain, State Adjutant, and a memorial table dedication. Six Treasure Valley mayors are scheduled to attend and there reading an official proclamation to make 9/11/21 "Elevate Our Everyday Heroes" Day.

There will also be speakers from across the valley and state representing first responders and veterans. There will also be free services all day (massage chairs, wellness cocoon saunas, red light and pain therapy, salt room with halo therapy, float pods or sensory deprivation pods, etc.) from 8 a.m. - 4 p.m. within the facility, as well as a resource fair, breathwork classes, peer support available, music, cornhole and more.

The Nampa Public Library partnered with the 911 memorial and museum in New York to tell the history through pictures and images of artifacts in 14 different posters.

The exhibit starts with the background of the attack and ends with current-day information. It also presents the ongoing implications through the personal stories of witnesses and those who survived the attack.

The exhibit opened Tuesday, and features personal stories about the history of the 2001 terror attacks on the U.S. and the ongoing implications of what happened. 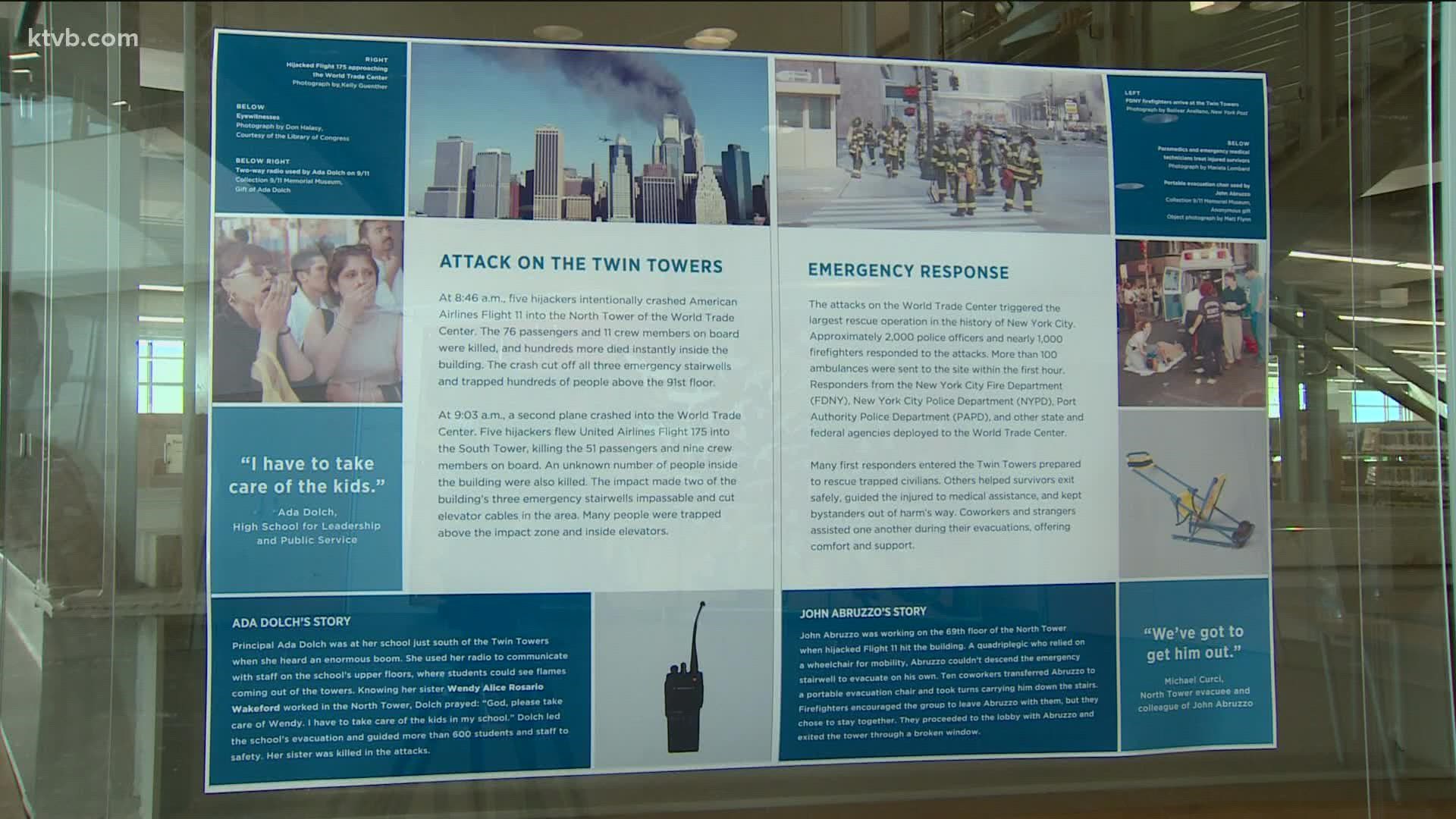 The Boise Civil Air Patrol will be serving breakfast at Warhawk Air Museum starting at 9 a.m. Saturday. The Sea Cadets do a color guard at the flagpole in front of the museum at 9 a.m. Nampa Mayor Kling is scheduled to speak at 11 a.m. at the base of the flagpole.

The veterans of the Combat Veterans Motorcycle Association will be raising awareness for local first responders. They will be selling t-shirts and doing a Poker Run that starts at the museum at noon. Around 150 to 300 people are expected to participate.

Even if you don't ride a motorcycle but want to participate you are welcome to attend and follow along the route. Those in cars are $25 each.

The registration for the event runs from 9 a.m. to 11:30 a.m. The official "shotgun start" is for bikes to take off at noon. The route will start at the Warhawk Air Museum, go down 39th to Garrity and then the riders will go in various groups on their own routes to The Corner Cafe Bar & Grill in Horseshoe Bend, then down Highway 52 to Emmett to The Round Up Bar, next is the Veterans Memorial/Lions Club on Highway 52 by New Plymouth, and it will end at the Kiwanis Club Park in Payette. There will be a band, barbecue and hot dog vendors, a beer garden, and silent auction. The cost is $25/rider and $10/passenger.

The Warhawk Air Museum in Nampa showcases more than a century of military history. As the 20th anniversary of the tragic event approaches, the museum is remembering that day with a 9/11 exhibit. The exhibit honors the nearly 3,000 lives lost on that day in 2001. It also provides a background on the terrorist attack to current-day information.

20 years ago, the Warhawk Air Museum set out a piece of cloth allowing visitors to write and capture their emotions at the time of the attack. Now, the museum has another cloth for visitors 20 years later.

The exhibit runs through the end of September. Military and first responders will receive free admission to the Warhawk Air Museum this Saturday. 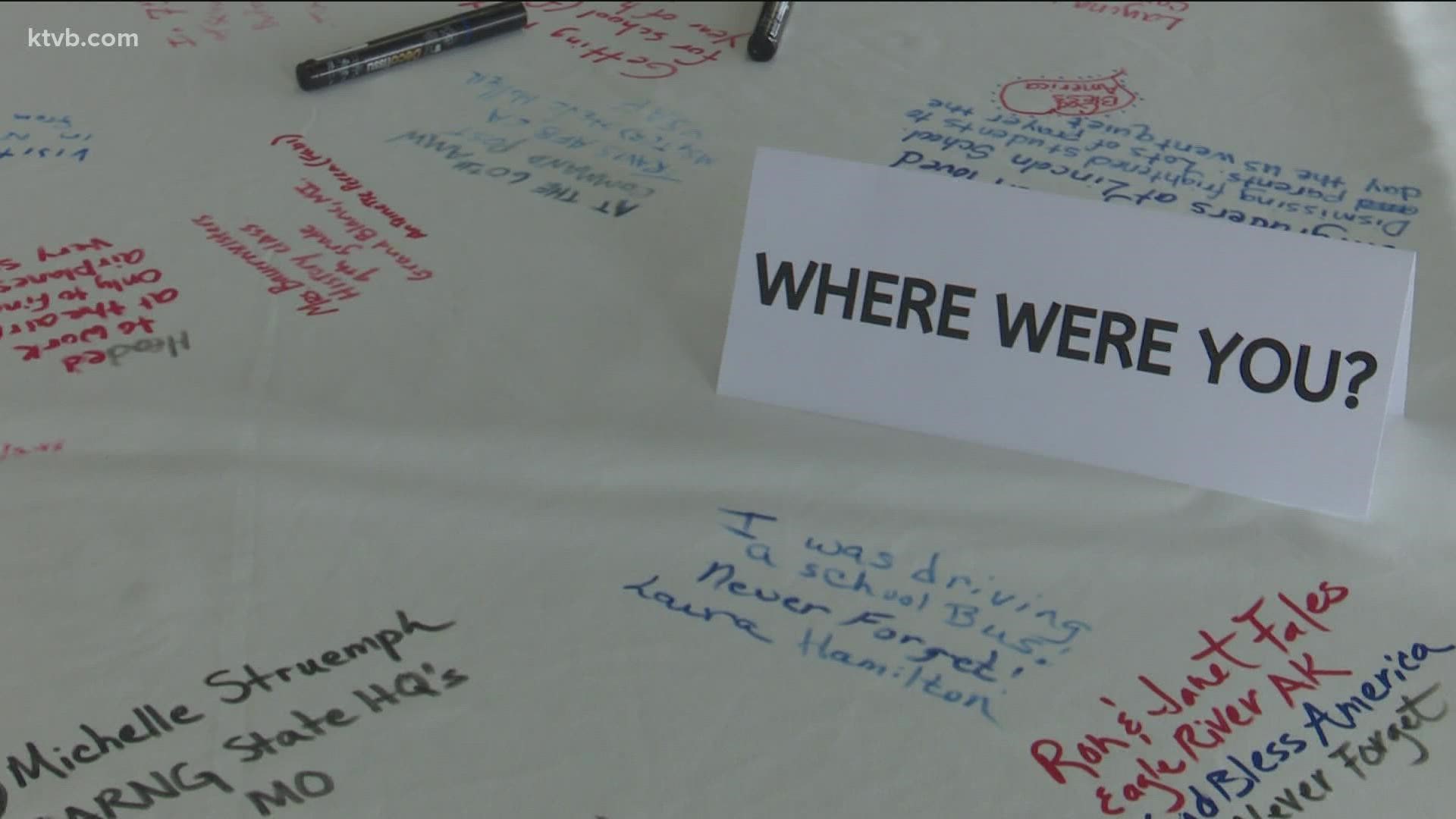 These are some of the 9/11 events for our area this Saturday. If you know of others and want to be included in this list, please email the details to ktvbnews@ktvb.com. Thanks.